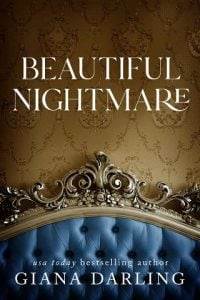 “All men dream: but not equally.

Those who dream by night in the dusty recesses of their minds wake up in the day to find it was vanity, but the dreamers of the day are dangerous men, for they may act their dreams with open eyes, to make it possible.”

“Once Upon A Dream”––Lana Del Ray

“Pretty When You Cry”––Lana Del Ray

For years, I’d dreamed of destroying my father.

I spent hours concocting schemes, planning his demise in so many of my waking and sleeping hours.

It was something I longed for so intensely that the desire followed me into the dark of my subconscious. I went to bed with it and woke up to it, a taste on the back of my tongue, a message burned into the inside of my lids.

I was consumed by this dream and it became my life.

But that’s the funny thing about dreams.

As the gun ricocheted in my grip, spitting a bullet into the barrel chest of my father, all my dreams should have been a hair’s breadth away, as close as the bullet was to Bryant’s black, corroded heart.

Instead, I couldn’t seem to blink away the nightmare my life had become in only a few powerful minutes.

Bianca was gone. Ripped from me by the ruthless hands of the truth I’d hidden successfully for so long.

She was gone in a way where I knew she wouldn’t come back.

It twisted up something in my chest so tight I couldn’t breathe.

Though, the fact that my father had pulled the trigger a sliver of second after I did might have had something to do with that too.

I staggered back as pain tore through the top of my shoulder, the bullet carving out a path through my trapezius muscle. Through the pain, I wondered if he’d missed his target on purpose from some lingering sense of paternal obligation, or if I’d thrown him off his mark by shooting him first.

“You fucking shot me,” Bryant grunted as he pressed a hand to the seeping wound, his breath a wet rasp.

I blinked at him as I breathed slowly through my nose, forcing myself to control the pain of my own wound.

“You’ll survive,” I said blandly, as if I didn’t care.

Inside me though, a storm raged. I wanted him dead on the ground. I wanted the security of knowing he would never come after the Belcantes, after The Gentlemen, after my siblings ever again. Six feet of earth and a locked fucking casket could keep Bryant Morelli from exacting revenge against those he thought had wronged him.

And it was irrefutable now.

I was no longer just the black sheep, the disappointing son only good to use as tool for his darkest deeds.

All because of one angel-eyed girl.

He sneered at me through the pain, his expression curdled with absolute hatred.

“You’re a bigger disappointment than I could have imagined, Tiernan. And trust me when I say, I didn’t know the bar could be lowered further.” He hissed as he shifted to step forward, blood seeping through his fingers, staining the crisp white of his dress shirt like spilled wine. “It was foolish of me to think you could ever be worthy of the Morelli name.”

Something creaked and groaned in my chest, the sounds of a structure about to collapse.

All I’d ever wanted was acceptance and unity.

All I’d ever been was alone and a tool of chaos.

I told myself this was different, this was my choice.

“I don’t need you,” I told him, my voice somehow unwavering, as cold as I felt inside. “I never did. It was my mistake in thinking your opinion mattered to me.”

“My opinion matters to the most important men in this country for a reason,” Bryant snarled as he holstered the gun to take out his phone, fingers trembling just slightly as he dialled. “Yours matters to no one. Not your mother, not your brothers and sisters, and now, not even the pathetic bastard offspring of Lane Constantine.”

“You know fuck all about what really matters,” I said as fury worked itself like a sliver under my horrified numbness.

I stalked forward so abruptly, he fumbled his phone before he could lift it to his ear. The grin that possessed my face was manic, so wide it was almost painful. I clasped Bryant strongly by the shoulder, ignoring the pain in my own, and dug two fingers into the gaping wound I’d shot out of his hide. He made a horrible, painful keen in the back of his throat and struggled to find leverage to push me off. I stepped closer, pressing harder. His blood poured over my fingers with every pulse of his corroded heart.