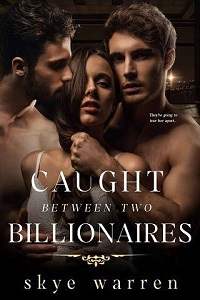 I learned early not to trust men or money. Both of them have a way of disappearing when you need them most. There must have been some hope left, though.

Because it’s my stepbrother who breaks me completely.

Salt hits my tongue before the driver opens the door, splashing the sleek leather interior of the limo with watercolor light. This dock homes the most expensive boats in Boston, outfitting them with caviar and champagne before they set sail.

The driver’s face is in shadow, sunshine forming a halo around him, but I already know he’s expressionless. Like that time I sweet-talked my way into the flight attendant’s lounge? He showed up in his black suit and bland smile, having searched the whole airport with security.

Like every part of my father’s life, he’s cold and predictable and expensive.

Gravel shifts beneath my sandals. I have to squint my eyes against the brightness. Seagulls swoop above me as I step onto the long deck, searching for their breakfast, completely oblivious to the thud of my heart against my ribs.

I would know which yacht belongs to Daddy even if I hadn’t seen it before. It’s the biggest one, the best one. The one that gleams the brightest, with Liquid Asset in bold letters.

The silhouettes of three people split the sunlight.

Three people, not one. Disappointment hitches my breath. What did I expect?

Last year Daddy’s new wife got so drunk she threw her champagne flute in the air. It came down in a splash of pale liquid and bubbling despair. After the steward mopped up the broken crystal, once the wife had gone belowdecks to sleep it off, Daddy sat looking out at the dark sea. I sat beside him. “Why?” I asked, unable to keep the question in. After so many years it came out. “Why do you keep getting married to these people?”

He had been a little drunk himself. Not enough to play volleyball with the drinkware, but enough that his eyes had gleamed with a distant sadness. He pulled me close, and I nestled against him the way I had as a little girl, breathing in the cedar-salt scent of him.

“I love your mother,” he said then, present tense. He loves her.

There shouldn’t have been enough of the wide-eyed little girl inside me to believe it meant my parents would get back together, not after ten years and even more spouses between them. They couldn’t even arrange my visits on spring break without an intermediary—me, of course. But maybe some part of me thought there wouldn’t be a new wife this year, after that confession.

Well, now I know for sure. There’s no chance of them being together, not even in the same room. But it would be nice if Daddy had stopped marrying his way through every divorcée in Boston’s upper crust. Like the limo that picks me up from the airport, there’s a new model every year.

Daddy smiles at me from the deck, and I can’t help the smile that meets his. Can’t help the little run I make down the rest of the deck before launching myself into his bear hug. We’re far from a happy family, but I always love seeing him. I may be fifteen years old, but the little girl inside me wears pigtails and wants to run to her daddy.

Even if it means putting up with the strangers he marries.

“How’s my girl?” he asks, tucking me into his side.

“Sleepy.” A guy in a rumpled suit had snored beside me the whole flight, which would have been more annoying if I hadn’t swiped his phone and read his e-mail using the plane’s Wi-Fi. Someone had a secret girlfriend in New York City. At least she used to be secret. A few clicks had changed that as we were flying over the Atlantic.

Guilt still knots my stomach, but then I imagine my mother as that man’s wife. More likely she would be the secret girlfriend. Men shouldn’t be allowed to hurt her so much.

“You can take a nap after brunch,” says the woman I was hoping wouldn’t speak to me.

“Harper,” Daddy says, giving my arm a secret squeeze. He’s never forgotten the time I yelled, You aren’t my mommy. Never mind that I was seven years old. “This is Louise Bardot. Louise, this is Harper. Isn’t she beautiful?”

I’m surprised I don’t get frostbite, that’s how chilly this woman’s smile is. “Everything you said about her is true, Graham. She’s an absolute doll.”

“Thank you, ma’am,” I say just to see her dark eyes flash with rage.

Daddy’s smart enough to run a Fortune 500 company, but he can’t figure out when a woman is bullshitting him. Or maybe he knows, because he steers me away from her. “There’s someone else I want you to meet. This is Christopher.”

There have been other boys. Other girls. Most of the time we ignore each other, having bigger problems in our broken rich-kid lives than the stepsibling of the month. Sometimes one of them will take a swipe at me, with sharp words or a surprise shove as we pass in the hallway. A preemptive strike, so I know better than to mess with them.