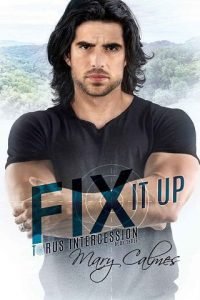 Nothing good ever came from change. People coming and going out of my life, that was the worst, and I’d had enough of that as a kid with my mother. Not that she wasn’t wonderful, and not that I didn’t love free-spirited, goddess-worshipping Sherri Barnes, but I had never wanted to go through people or, more specifically, men, like she did. The reality, though, was that we were exactly alike, except I didn’t marry them. That whole thing was beyond me.

Case in point, the guy I had been screwing at Torus Intercession, where I worked, had gone out on a job and fallen for his client. He fell hook, line, and sinker and was now, first off, the sheriff of a tiny town in Montana—a fate worse than death—and second, was now helping the man raise his kids and—and—he got married.

Seriously. Married. What the hell?

Another guy I worked with, who I hadn’t been fucking, had also gone out on a job, in Vegas of all the ridiculous places, and he too ended up falling in love and getting married. Who did that?

I felt like I was in some weird alternate dimension where everyone just said “I do,” like my mother usually did after one good date. Shit like that happened in books and movies, but not in real life. You were supposed to find out things first, make sure the other person had good credit or hadn’t jumped bail or didn’t have any overdue library books. And even more perplexing than the quick coupling was the strain it put on other people. What about those left behind? What about the people left trying to replace someone who was good in bed or, even more importantly, a trusted colleague? I had told my boss that losing people was definitely not good for the rest of us and didn’t promote his whole “oneness with the universe” crap. Not that I’d said crap, but I was fairly certain that leaving that word out while sounding both annoyed and pained had still driven my point home.

At Torus Intercession, we were fixers. We specialized in a kind of intervention, which meant getting all up in our clients’ business, and alignment, which went along with his other tangent about always leaving a situation better than how we found it. We were skilled in what my boss, Jared Colter, called syzygy. My mother had known, without me explaining, what it meant.

“Oh how wonderful, sweetheart,” she had crooned over the phone. “Natural alignment and balance in all things. Your new boss sounds heavenly.”

Jared Colter, though seemingly steady and solid, had this directive that when we worked a job, whatever the situation we found ourselves in, we had to leave it better than we found it. I told him that wasn’t reasonable.

I had a theory that when he was in the CIA, he killed a lot of people. Like, really, a whole shit ton of people. Someone, somewhere, must have told him that karmically he was fucked unless he could fix it, balance it out, and do enough good to make up for the bad. It was the only thing I could think of that accounted for the above-and-beyond part. Because honestly, how was saving someone from a stalker not enough? Doing more, beyond that, making sure they were content and happy before I walked out the door, was that really something I needed to be concerned with?

I looked up and was surprised to find that Shaw James had stopped in front of my desk with a cup of coffee in his hand.

“You just asked a question.”

“Yeah, ya did,” he corrected me. “And maybe you were thinkin’ out loud, but the answer to the question of should we concern ourselves with making sure people are content and happy before we leave is, of course, yes.”

“Because it’s the right thing to do.”

“You need to be more caring,” he told me, smiling, as usual looking like some throwback Celtic warrior from the Iron Age. It was the towering height, red hair, and full beard, along with dark green eyes that made one think of the Highlands.

“Get away from my desk,” I ordered him.

“You know,” he began, his voice softening into a steady, soothing croon, “you’ve been a bit on edge since Brann and Croy left.”

Brann was old news. And yes, I’d enjoyed sleeping with him, but once I knew he was serious about Montana, I let it go. The change part of it, that he would need to be replaced with someone new—that had been where my irritation came in.

Croy was different. I’d even asked him, point blank, if he was coming back, and that asshole had lied and said yes. At least with him, I’d kept in touch. I’d gone to see him in Vegas to make sure he was all right. It was weird, but even though I’d been sleeping with Brann, I was closer to Croy. Probably because we weren’t fucking. And even though I missed Brann—or anyone—in my bed, I actually missed talking to Croy. The fact that I’d made an effort had surprised the hell out of him, as well as the other guys in the office.