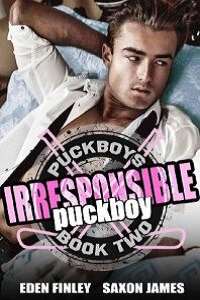 Everyone has a thing. My best friend, Tripp, he’s the sweet one off the ice but has a razor edge when he’s being the best goaltender in the NHL.

I’m the one with bricks for brains who’s always smiling.

Losing the Stanley Cup to Boston last night stung like a bitch, especially when it was followed up by yet another fight with my girlfriend, but then instead of drowning my sorrows with my best friend, he ditched me for half the night. I spent most of it drinking with the team before they headed home and I holed up in an all-night diner and ate my weight in pie.

All I want is to go to bed and sleep it off, but she will be there. She’s always there. I don’t even remember when she moved in. Tripp came over one day and asked if Jessica lived with me. When I said no, he pointed out she’d redecorated and all her stuff was there. I’d never lived with someone before, but it didn’t take long for me to realize the worst part of sharing your space with someone. When you fight, you can’t get away. Hence the all-nighter of whiskey and pie.

She called me irresponsible. Again. I want to be offended, but then the waitress asks if I want another slice of pie, and my stomach lets me know it regrets all of my life choices up to this point.

The thing is, I can be responsible. Sometimes. When it’s important. I just don’t see why people choose maturity when the alternative is having fun. She resents my away games, my celebrating and commiserating with the team, and my friendship with Tripp.

Jessica wants to be my whole world, and yeah, I want a relationship, a person I can spend my life with, but that can’t be all I have. I need hockey, my mom, my baby sister I adore, and then there’s Tripp. Tripp’s my bro, and he owns a good chunk of me.

Other women have tried to come between us, and it’s never worked. Without him around, everything is … claustrophobic. Suffocating.

Jessica mentioned a ring. Again. When I told her I wasn’t ready for that, she got pissed, and then when I said I was going to go out with the team, that was unreasonable. She said she was leaving and to call her when I grow up, but she’s threatened to leave countless times, and I don’t know what to do anymore.

Would she be more forgiving of me staying out all night if we got married? I doubt it. If anything, my teammates’ marriages have shown getting hitched weighs you down even more. I don’t want to stand at the other end of an aisle and promise forever when everyone knows forever doesn’t mean shit these days. Not for normal people, let alone NHL players.

Marriage isn’t something I want, and as much as I want to blame hockey for that, I was anti-marriage even before making it into the NHL.

After my parents’ divorce, Dad took off, and Phoebe and I didn’t have much to do with him anymore. Mom was distraught, and we had to pick up the pieces. But then she became a serial bride, and every breakup was worse than the last. Lawyers, alimony, fighting …

Phoebe and I love our mother, but she’s a disaster when it comes to love. Growing up and seeing what divorce does, both my sister and I vowed we’d never put ourselves through that.

I don’t understand why it’s so important to Jessica. Bragging rights? My money?

We already live together, so how would a piece of paper change anything?

Maybe I should do it and get it over with. It’s important to her, but it’s not to me. But then the thought of being married sends a shiver through me. How could I commit when I’m not even sure I could say “I do” without running from the church or setting myself on fire to get out of it?

I need advice, and there’s only one person I trust to have my best interests at heart. I’m sure he won’t mind me interrupting his hookup now. I’ve given them all damn night.

I leave the diner and take a car to Tripp’s penthouse apartment just off the Strip.

He’ll still be in bed since it’s officially off-season, and it’s where I’d be if not for the shitshow of a night, so I let myself in with my key.

Tripp’s apartment overlooks the Wynn golf course, where we’ll be spending a lot of time together this summer, and the whole living area is flooded with morning sunlight. His bedroom door is closed, so before I go barging through it, I knock loudly and shout, “Cover up, I’m coming in.”