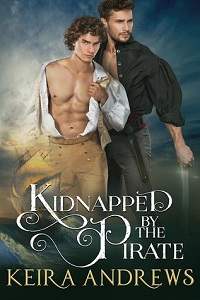 If pirates were to be the bloody, savage end of Nathaniel Bainbridge, he wished they’d get on with it.

The windswept deck was damp beneath his bare feet, prompting thoughts of the dewy grass of home. What he wouldn’t give for the freedom to run across the fields of Hollington Estate, wind rushing in his ears over the steady thump of his heart, the world falling away in his wake.

Instead he was confined by an endless, restless sea taunting him with its wildness. In England, he’d heard countless tales of villainous pirates and their dastardly deeds. People spoke as if the ocean teemed with the brigands, but the voyage had been mile after mile of…nothing.

Nathaniel shook his head at his foolishness. Not that he actually wanted pirates to attack their ship and massacre them. If only he could move, he would keep boredom at bay.

He gripped the railing, longing for dirt beneath his nails, scratches on his palms from tree bark as he climbed and explored, wonderfully aching muscles from hours in the lake. If he could only run a simple mile. Hardly any distance at all, but trapped on the ship, that much clear land would be a marvel.

He wiped sea spray from his eyes. If only the ability to run and jump and swim was worth anything at all in his world instead of being childish folly he was supposed to have outgrown. Men did not climb trees or swim for hours, and certainly they didn’t run for the sheer pleasure of it the way he had at Hollington.

Of course, the estate wasn’t theirs anymore, sold off to pay debts, so even if he made his way back to Kent one day, he would never return to those rolling hills. Its verdant trees and round, tranquil lake would now be home to another family.

No, for the foreseeable future, home would be Primrose Isle, a new colony his father desperately wanted to see flourish. Walter Bainbridge had found his fortunes in England not the least bit fortunate, and as a governor in the New World had the thing he loved most dearly: power.

Nathaniel’s future bride waited there. Elizabeth Davenport stood to inherit quite a fortune, and for the colony—and Walter—to thrive, alliances had to be made. So Nathaniel would do the only useful thing he could and marry.

He brushed a fresh spray of briny seawater from his face as he stared out at the endless night, keeping a firm hold on the rail. His untucked shirt flapped in the breeze, the lower fastenings on his breeches unbuckled under his knees.

In the dark, there was no one to comment on his state of undress, and he supposed the crew didn’t care a whit anyway. His trimmed hair curled at the ends in the dampness, and he tucked a lock behind his ear. It had been his little act of rebellion to cut it much shorter than most gentlemen. He certainly wouldn’t be wearing dreaded wigs, either, if he could help it.

Clouds conspired to hide the stars and razor-thin crescent of moon. He shivered in the late September night’s chill; he really should have worn his hated shoes and jacket.

At least the wind was no longer the bitter cold of the mid-Atlantic as they neared the West Indies. He shifted back and forth on his feet, lifting them like a racehorse stamping at the starting line.

The Proud William was fairly large, a merchant ship carrying a cargo of salt fish and forged metal tools to the colonies. But when he’d attempted even a light trot around the main deck, the crew had reacted with consternation at best, hostility at worst.

Running was his very favorite activity and the thing he excelled at most in life—much to his father’s disgust. Swimming in the lake in summertime, cutting through the placid water with sure, even strokes, was a joy as well.

To be surrounded now by endless water but unable to dive in and soothe his cramped muscles was the worst torture. He’d asked the captain if he could at least climb the mast or sail rigging and had been flatly refused.

So he stood by the starboard rail and sometimes paced, careful to stay out of the crew’s way. At least he had been told their progress was swift, and that after a month’s voyage—thirty-one days and some thirteen hours since they left England, to be exact—they would reach the island in a fortnight if the wind held.

He was informed that some ships took several months to reach the colonies. Ships could leave London the same day and arrive weeks or more apart. Such was the way of the sea.

Staring out at the nothingness, he stopped his restless shifting and squinted. The weak sliver of moon had valiantly escaped the clouds for a moment, and Nathaniel thought he spotted a strange kind of movement. The night took on shape before becoming uniform once more.