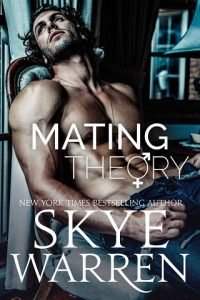 And sorry I could not travel both

And be one traveler, long I stood

And looked down one as far as I could

To where it bent in the undergrowth;

Then took the other, as just as fair,

And having perhaps the better claim,

Because it was grassy and wanted wear;

Though as for that the passing there

Had worn them really about the same,

And both that morning equally lay

In leaves no step had trodden black.

Oh, I kept the first for another day!

Yet knowing how way leads on to way,

I doubted if I should ever come back.

I shall be telling this with a sigh

Two roads diverged in a wood, and I—

I took the one less traveled by,

And that has made all the difference.

Tearing the mold off bread so I have something to eat.

A black eye on the first day of school. Two dollars to my name.

Always had more pride than sense, which I guess is how I ended up on top of a hollowed-out building. I’m surrounded by the biggest goddamn block party without a single drop to drink. Only Harper St. Claire could have turned the razing of a prized old building into a celebration.

Half the city showed up for the big demolition. They’re dancing on the bones of that long-abandoned library, praying for a fresh harvest like it’s a sacrifice.

Christopher and Harper, they’re the gods in this ritual.

They’re the ones we pray to.

A sound makes me tense. This may be a hollowed-out fucking building, but it’s my hollowed-out fucking building. Some of the veneer that lets me wear a suit and smile and pretend I’m in control of myself has broken down. It crumbled along with the library when the wrecking ball crashed into it. There’s only the feral part of me now, and my back’s against the wall. I’m ready for a fight.

The rusted metal stairs creak and whine at someone’s weight.

My skin ripples with awareness. I can almost imagine the hair on my back rising up like some kind of wild animal. I’m two seconds away from baring my teeth. You don’t come near someone bleeding, even if the pain is only on the inside. Really fucking poetic, watching the two people I’m in love with end up with each other. Even from ten stories high I can see the way her eyes shine when she looks at him.

And I can see the way his body tightens when he looks at her.

A head appears over the rim of the building, blocking my view. The girl is hallowed by the spotlights on the street, her hair almost shimmering from the force of the light behind her. Or maybe it only looks that way because I’m wasted. “This roof’s taken,” I say, my voice hard. “Now fuck off.”

She does not fuck off.

Instead I’m treated to the sight of backlit breasts and a slender silhouette as she climbs onto the roof. I made a chair out of an old radiator. Front row seats to heartbreak. Maybe she’s one of Harper’s friends from prep school. It might be a good time for her, watching me pant over what I can’t have. She stretches her legs out in front of her, settling in beside me, using her warmth like a weapon against my numbness. “You excited about the park?” she says, her tone challenging.

“It’s going to revitalize the west side of Tanglewood.” A spitfire, this girl. Her sarcasm so sharp I can feel it against my throat like a blade. “All the sad little poor people can finally see what a flower looks like. They’ll have art and plants and magic, so who cares that they don’t have food?”

Not a friend from prep school. Maybe she’s some kind of do-gooder in Tanglewood, an activist, a volunteer, working with the poor. “Why are you at the groundbreaking for a park you don’t want?”

“I could ask you the same question.” She holds up my bottle to the sliver of orange sunset. It gleams empty. “How long have you been up here, anyway?”

I climbed those shaky metal stairs to the roof before the first crush of steel against concrete. The crowd gasped when the dust cleared, their eyes on the two-story painting revealed on the building behind. I was too busy watching the only two people I’ve ever loved share a private kiss on the scaffolding that serves as their temporary stage. And then drinking, drinking, drinking. I’m not sure I could make it back down the stairs without breaking my neck, so I’m trapped here.