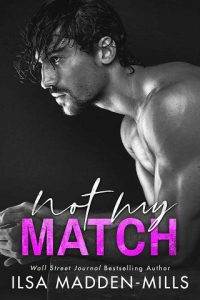 This night is a death sentence. Pretty soon the executioner is going to pull me off this barstool and drag me straight to the guillotine. I’m so fed up and tired I won’t even struggle. Just make it fast and painless, I’d tell him. And might you spare me a sip from your flask to see me off?

My esteemed date is Charlie, but he’s insisted I call him Rodeo. A short guy, maybe five-four if you count the Stetson. He’s a belt hitcher, tugging at his jeans from the back, making the rearing horse on his buckle jiggle. The spinning lights from the club grazed that gold buckle earlier, and the ricochet nearly blinded me. Nothing against height-challenged men or country attire, but the weasel is checking out every girl in the Razor.

Just another nail in the coffin for one of the crappiest days ever, from my car being broken into this morning to my advisor gleefully telling me he would not be recommending me to study abroad. Disappointment, heavy and thick, slams into me all over again. Forget the busted car window and some thief’s poor attempt at hot-wiring my car—I was living for the chance to study in Switzerland. Everything I’ve been dreaming of, hanging on to with bated breath, has evolved around the fellowship at CERN, the European Organization for Nuclear Research.

My chest hurts, and I lift a hand and press it there.

I’m blaming these past few days on the birthday curse. Bad things happen around my birthday, and I’ll be twenty-four in five days, so it stands to reason fate is taunting me as she loves to do.

“You like?” Rodeo drawls in a lazy southern accent, preening as he gives me a view of his textured olive-green cowboy boots. “Alligator. Flew to Miami to buy these. Custom made by a real designer. They go from casual to dressy in a snap.”

“Uh, nice.” He’s a fairly handsome guy; I’ll give him that. A face. Teeth. Hair. Arms. Legs. But it’s the sneaky, mean look in his dark eyes that gives me pause.

Pretty soon I’m going to find my wits and the good sense Mama gave me and get out of this date, but right now, I yearn to finish my whiskey.

“The texture of the boot comes from the young alligators, since their bellies are softer. More malleable in the tanning process. They raise ’em on a farm, then kill them and make boots. Fascinating process. I’d like to see it in person, to tell the truth. Do you think they put them to sleep or just kill ’em outright with a knock to the head?”

A second passes. Or a minute. I inhale a breath. “I don’t want to know.”

“Ah, you’ve got a soft heart, honey.” He waves away that idea and holds his foot up a few feet off the ground, and part of me thinks about giving him a teeny tiny little push. “Now don’t be shy; give ’em a feel. Might be your only chance to feel quality.”

Quality? Well, isn’t that just rich. I’ve sunk low tonight. A guy who wants to see baby alligators killed is what I attract.

“I prefer not,” I reply with ice in my voice—not that he notices.

“Feels like silk.” His eyes linger on my legs suggestively as he inches in closer to me, giving his belt a little hitch.

A girl pops up next to him on the other side and orders a drink, and I visibly blow out a breath as he gives her the up and down.

The man is here to get laid. I get it.

I picked him off the app only because there was an emu next to him, and I felt nostalgic. They’re regal, odd birds, their height reaching six-ten by maturity. Daddy used to keep an older mated pair on our farm after a local safari place closed and left them to wander aimlessly. I used to feed, pet, and gaze at them longingly, lovingly, amazed at how fast they ran (up to thirty miles an hour), how they seemed to look at me and see that I was just as strange as they were: a tall lanky girl with oversize glasses, braces, and no friends. Daddy, who recognized my affinity with unique things early on, built them a two-acre enclosure, pond included. To see them play in the water . . . grief swells up and washes over me—for the loss of them and Daddy.

In hindsight, I realize that Rodeo must have been standing on something—a box or a ladder—when he snapped his bio pic. Taking a sip of my drink, I squint, trying to picture us having sex. I’m five-nine, so how would that even work? I’m really into eye contact, and if we had sex missionary-style, then his head would land somewhere between my breasts and my stomach. He’d have to crane his neck to look up at me. Maybe I’ll buy some Ken and Barbie dolls, cut Ken’s legs off at the correct ratio, and test it out. A shame, but sometimes science requires sacrifice. When you don’t have a clue, testing is important. I never want to be unprepared. My curiosity isn’t because I plan on having sex with Rodeo—heck no, I just love random tidbits to squirrel away.