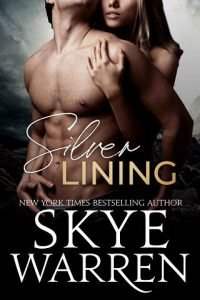 My father was the first man I killed.

He wasn’t the last. Combat means seeing death up close and personal. I know the smell of death. The taste. The feel of it weighing down the air. It’s heavy as hell.

Death turns the SUV I’m driving into a pressure cooker with me and Holly inside. Every bump on the road threatens to set us aflame. “You’re going to be okay,” I say, and my voice doesn’t crack. I sound confident and sure. It’s a fucking lie. “You’re going to make it.”

Plenty of times in my life, I’ve wished for death to slip a silent knife into my back.

Not now. Not when Holly is blinking in the passenger seat, her pretty brow furrowed as she looks down at the heart-colored stain spreading across her shirt. She doesn’t know yet. Not on a conscious level. Adrenaline is flooding her body, shutting down higher thinking. She doesn’t know one of the colonel’s men shot her.

She doesn’t know the bullet tore through soft flesh.

“Stay awake. Just stay the fuck awake. That’s all you have to do.” Stay alive.

The sound of the tires on pavement, the roar of the engine, they barely register as sound. Not after gunshots in the small, enclosed space of her apartment. I led her there from my abandoned-church-turned safehouse like a lamb to the slaughter. No, not exactly—I taught her how to shoot a gun before that. I left out the lesson about knowing the odds. Three armed enemies. One Holly. The math doesn’t work.

She makes a sound that could be a question—awake? Then her head lolls onto her shoulder. She’s passed out from the pain or the shock. Or sleeping. That’s a nice thought. I can imagine her resting in the passenger seat instead of bleeding out.

The air gets heavier. Thicker.

I want to get out from under it. I want to breathe. But my lungs can’t expand against the pressure and anyway there are things to do. We’re two blocks from the church safehouse, where we should have stayed after I kidnapped her. Maybe forever.

Instead I have a limited amount of time to make a phone call.

None of my brothers will do any good right now. None of them can talk to me. That would only put them in danger. Yes, they’re tough sons of bitches. Our father would have killed us if we weren’t, but even they can’t fight the whole of the United States government.

There’ll be sirens soon, and when they stop, there will be other government operatives moving in the shadows. The person I need right now doesn’t mind the darkness.

Dax answers on the second ring. “You better be on your knees with a firing squad behind you, if you’re calling me. That’s the only way I’m going to forgive you for going off the grid for two goddamn years. I thought you died. Or got married.”

“I’m driving hot,” I say between gritted teeth. “Heading toward the Meatpacking District. Got a friend with a GSW. Need medical assistance.”

“It’s the second one, isn’t it? You got fucking leg shackled, didn’t you?”

“If you want out, tell me now. I’m in real deep, and anyone near this will end up on a goddamn government watch list for the rest of their lives.”

“I would be offended if I wasn’t already on it.”

Fair enough. Dax is part mercenary for hire, part arms dealer. That’s the kind of company I kept before I met Holly, before I brought my brothers back into my life to protect her. For all this time, I tried to go straight. To do honest government contracts and security details. To be the men my brothers believe me to be.

I give him the address to the safe house. I’ve never given this information to another person, not even my brothers. His response is to hang up on me. He’ll be here soon.

The church looms in the night, ominous and empty, a black hole in a shitty part of town. There are no lights as I kick the SUV over the curb and behind the building. It’s mostly memory that guides me through the brick enclosure to the secure garage.

Only when they close behind my tail lights can I finally take a deep breath.

You’re going to be okay, I think, but I don’t know whether I mean Holly or myself.

I gather up Holly’s listless body out of the passenger seat. She’s breathing. Such a faint movement. So fucking important. I cradle her head against my shoulder and carry her downstairs to a cot. I put a hand on her chin and shake. “Wake the fuck up.”

I head up the stairs for the first aid kit. One. Two. Three.

Around the corner, to the dusty office. Four. Five.