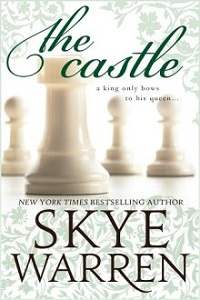 “Whenever a thing is done for the first time, it releases a little demon.”

I deal with dangerous men every day. Criminals. Lowlifes lurking in the darkest corners of the city, without ever flinching. Bruised knuckles and bare tits. That’s what I know.

It’s this gilt and glamour that makes me itch.

Men in tuxes. Women in glossy gowns. An enemy who greets me with a handshake.

Hair on the back of my neck rises.

Geoffrey James is a businessman with a lot of influence in Tanglewood. He has a reputation for being honest, despite his family legacy. Generous, despite his wealth.

The skin around his eyes wrinkles as he smiles. “Gabriel. Or do you go by Gabe?”

“Gabriel will be fine,” I say smoothly.

“Of course.” A jovial laugh. Does he practice that? “I wouldn’t want to call you Miller. That’s more your father’s thing. The formality.”

Formality. That’s one word to describe my father’s penchant for violence.

In contrast to this glittering estate, we lived in a goddamn hovel. Such very different social spheres. So very similar, once you get beneath the surface. The James family fortune was built on the backs of whores and drug addicts.

“My father is no longer”—I pause, savoring the words—“in business.”

For a brief moment James appears nervous, his wide forehead slick with sweat. He pulls a handkerchief from his jacket, wiping hastily. I do him the favor of averting my eyes. I have no plans to break him.

Normally I don’t enjoy the pretense of fancy things—diamonds and gold. Pretty wrapping on dark cruelty. Though I have to admit this estate is tastefully done, the lawns a demure rolling green, the front of the house in an old manor style. A rich moss scent saturates the night air. Fireflies dance in the distance.

“Built it for my wife,” he says, gesturing to the house with his damp handkerchief.

I vaguely recall that he’s widowed. “My condolences.”

“A long time ago now, but thank you. It’s just me and my little girl these days.”

As we watch, a Bentley pulls up into the curved drive. A young valet sprints around the car to catch keys worth more than he’ll make in a lifetime. Another glittering old couple ascends the staircase.

A young woman steps onto the front portico to greet them, her smile bright enough to light the entire mansion. Her pale pink dress ruffles in the summer breeze. In a world of falsehoods, she looks completely genuine as she greets the newcomers, giving them warm hugs.

Even from ten yards away I can tell she squeezes them.

What would it feel like to be held in her slender arms, her body lithe and pale beneath that floaty fabric? It would tear beneath my hands. The dress. Her skin. I would ruin her.

The couple and the woman go inside, leaving me to catch my breath.

I manage to look sideways and catch the glint of pride on James’s face. Good Lord, that’s his little girl? He would probably have a stroke if he knew all the ways I want to defile her.

“It’s her graduation party,” he says.

Then she’s eighteen years old. Legal. I should probably be ashamed for thinking of her in sexual terms, but shame was beaten out of me years ago. “Give her my congratulations.”

“Of course,” he says, lying through his teeth. The girl will never know I was here. Never know my name at all. “Shall we go inside? I keep the good brandy in my study.”

What we have to discuss is best done in private anyway.

Wouldn’t want to spoil the party by talking about dirty money. Wouldn’t want to ruin little Ms. James’s celebration by exposing her father for a fraud. I’m sure she worked very hard at her expensive prep school, wearing plaid skirts and dark green cardigans and curl-tipped pigtails.

At least that’s how she looks in my imagination.

James isn’t lying about the brandy. A thousand dollars a bottle, I think, breathing in the cherry notes. I take a sip and amend my evaluation. Two thousand, at least. Delicious, I’ll give him that. If only he had spent that money on his debts instead of fine liquor.

He settles across from a chess set, and I wonder whether he actually uses it. It doesn’t look dusty, but good housekeepers can fix that. I pick up a wooden pawn, running my thumb over the ridges. The beige wood doesn’t have a single visible knot, every imperfection whittled away before being allowed in a place like this.

His gaze tracks my movements, clearly displeased. I guess he knows I’ve seen the books. He’s at a disadvantage, enough to let me do what I want. With this chess set, at least.