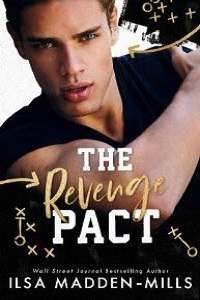 That’s right. These All-Americans became the biggest upset in college football and a complete embarrassment to their town.

Interceptions. Dropped balls. Missed blocks. Fumbles. Name it, they did it.

First, there’s River Tate, the popular frat boy. He’s supposed to be a superstar wide receiver but dropped more passes than he caught.

And rounding out the trifecta of crap is Hollis Hudson, the mysterious tight end who keeps everything locked down. He couldn’t run a route to save his life this year.

I lie to myself all the time.

At half past six, I pop awake, and my first class isn’t till nine. Typical. Once my head winds up, there’s no shutting off the replay reel. Dark and ugly, our last football game rushes at me and my hands clench the sheets.

The score? Forty-seven to fourteen.

Jumping up, I stick my earbuds in and listen to “My Own Worst Enemy” by Lit as my fingers wrap around a pull-up bar I have in the doorway. I count out fifty, hop back down, and roll my neck. Blood rushes through my veins, adrenaline kicking in and obliterating the dark thoughts. I check the mirror. My face screams exhaustion and my ‘famous’ lips are in a thin, hard line.

Yeah. Keep telling yourself that.

The older, Craftsman-style off-campus house I share with my teammates, Crew and Hollis, is dead quiet when I walk down the hall to the bathroom. The silence pricks at me, crawling like spiders, reminding me of a funeral home. It brings back unwanted memories of my dad, and I kick those ugly thoughts away. A man can only handle so many losses in his head at once.

After my shower, I rip back the curtain that hangs around the old claw-foot tub. “Dammit!” Forgot my clothes. Again. My brain truly is the Bermuda Triangle. Info comes in and poof, it vanishes. I have excellent recall for the oddest things. Mating rituals of animals? Check. Football stats? Locked and loaded. Movie quotes? Branded in my skull. My classes at Braxton? Freaking ghost town with tumbleweeds blowing through it. That plane has flown over the Triangle and disappeared.

My brain goes too fast to focus on small details like underwear.

I wrap a towel around my waist and open the door, water dripping on the hardwood.

You’d lose your head if it wasn’t screwed on, Mom says. Then she’ll laugh and say, Now, what the heck was I doing? An image of her pops into my head, glossy brown hair, blue eyes, and the best smile on this planet. My chest tightens. She’s not awake yet or I’d call her. She sleeps until noon, my sister Rae told me.

A trip to my closet tells me I haven’t done laundry in a while. The only shirt that passes muster is one from sophomore year. It’s purple with our mascot on it, a brown badger on the pocket. Screw the haters who want to judge us for a shit season. Badgers forever! I yank it out and slip it on. “At least I have clean underwear,” I mutter as I shove my legs into a pair of black skinny jeans and zip them up.

I find the Chucks I’m feeling for today—I have ten different pairs—slap them on, then fish around on the floor for my novel and backpack.

“Yes!” I call out as I find them under a mound of clothes in my closet. Makes sense. I tore into my room like a tornado on Thursday before we flew to Louisiana for the game. I barely recall packing my duffle and running out the door.

My head was in a weird place after seeing her on campus. Didn’t talk to her—oh no, can’t do that—but I saw her in the student center. She was…sad? Fuck if I know. Her head was down as she read a book, not laughing with her roommates as they sat in one of the lounge areas. Inexplicably, she looked up (maybe feeling the intensity of my stare), saw me, then her gaze moved on, not pausing. That I can handle. It’s the usual. We’ve done it for a year. But her not smiling? WTF. Girl has the world. Smart. Beautiful. Perfect boyfriend.