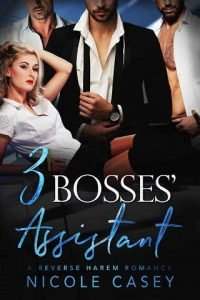 It was 9:45, close to 10 when I needed to get ready to go to bed. I had just gone out for my nightly cycle, and with my compact, muscular arms, I lifted the bike over my head and into the house. Placing my bike near the front door, I took off my helmet and united my strawberry blond-hair from my high ponytail, dropping it to tickle my waist. My stomach indicated I was hungry, but my mind was concentrating on other things.

I was finally going to interview with Calliope Publishing. You never really know what to expect from any new job, but in order to become a Junior Editor at a high profile company like Calliope you need to make a great impression to stay employed. I tried to psych myself up: I know I can get this job, I can nail it, I can relax.

Opening the fridge, I took out all of the ingredients I was going to need for my morning shake. They helped keep my mind focused and I knew I was going to be too anxious, running around trying to get other things ready to be able to focus on making it in the morning. I figured if I made enough now, I could have a shake tonight as well to help satiate my hunger. I measured out my ingredients and started the blender, only just barely hearing my phone ring over the roar. I picked it up and brought it to my ear.

"Hello?" I answered, but the whirling of the blender made whatever Erin was saying inaudible. "Sorry, hold on!" With my phone in my hand, I tried to turn the blender off.

“Hello? Hell-o?” Erin yelled on the other end.

"What the hell are you doing?" She laughed along with me.

Erin Bellose had recently graduated from law school with high marks. I was really proud of all the success she’d gained as a practicing lawyer. She was incredibly smart, really pretty, and more importantly, my best friend.

"You should save some for me." she snickered "I’ll come over."

"A little late for that." I chuckled.

"Relax, you don’t have to keep apologizing," Erin remarked. She was right, I had an awful habit of apologizing, but I couldn’t help it.

"Hey, I hope you don’t mind, but how’s it going with Jackson and Caleb?" I look a seat at one of my bar stools that hugged the counter-top. It was a modest kitchen, full of everything I needed and nothing more.

It was just a week ago at our friend Greer’s Halloween wedding that Erin admitted to me she was considering entering into a polyamorous relationship with two men. We’d had a blast that week, spending a lot of time with our friend Hanna at a club on the strip called Overground. One day, she told us that the men who owned the club were both interested in her and she’d been engaging in some kind of a polyamorous relationship with them, but wasn’t sure if it was going to turn into anything or not. Apparently, one of the men had PTSD, but her feelings for them both was pretty strong; she even used the word ‘love.’ She’d been fairly tight-lipped about it since then, but curiosity got the best of me when I decided to ask. I was also anxious to know if she was finally over her ex.

“No, it’s not bad, I just need to figure some things out.

I felt my stomach turn over. “Braxton things?”

Erin scoffed so loud I thought her spit was going to fly through my phone. "Who? Who’s that? I’ve never heard of a guy by that name." Erin laughed, and I laughed with her. Even if she was still figuring things out, she sounded happier and it was refreshing.

"Well, I don’t really get being in-love with two people at once, but as long as you’re happy, I’m happy." Maybe my subtle prying would get more information out of her.

"Honestly, I’m learning as I go too,” she replied. "Thanks for the support, Sascha."

"Anytime." Even though I was happy for Erin, I needed to get in the shower. "Erin? Sorry but I have to go. Busy day tomorrow."

"Oh right, you have that interview tomorrow, yeah?"

"Yeah,” I said, even though just being reminded of it made me nervous.

I felt a pang in my stomach. Even though I was happy for her, I still wanted something like Erin had, even with just one man. We both said goodnight to each other, and after finishing my shake, I showered and tucked myself into bed at 10:00, sharp. As I laid there, I couldn’t help but wonder about a relationship with two men. It seemed sort of exhausting and like jealousy would play a role, but what did I know? I put it out of my mind and decided to make sure I was rested for my interview. It was my dream to get this job, and I wasn’t going to get it if I stayed up all night worrying about my friend’s relationship. I closed my eyes, snuggled into my covers, and drifted off to sleep.