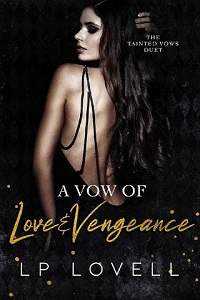 Emilia’s breaths were deep and even in sleep. If I hadn’t witnessed it, I’d never have known how hysterical she was only an hour ago.

I’d washed her father’s blood away and held her while she broke. Then I’d brought her here, to the Hamptons house. Where I could protect her and keep her safe from the oncoming storm, and there would be a storm.

Because her uncle had fucking used me. He’d made an alliance, forced me to take his niece’s unwilling hand to seal it, then betrayed me.

Oh, a storm was coming, all right. I would make it rain blood in the streets of Chicago. Betrayal was a knife that cut deep and hard, and I would repay the favor. Starting right now.

My little kitten didn’t even stir when I pushed to my feet and brushed my lips over her hair.

After her tears had stopped, she’d fallen into a silence that scared me. I thought maybe she’d gone into some kind of shock. She didn’t fight me when I gave her the sleeping pills. Her compliance concerned me, but at least she would be out for a few hours.

I had some things I needed to take care of right now.

Jackson was waiting for me at the bottom of the stairs, one hip propped against the banister and a wild grin on his face. “Did The Outfit princess really kill Roberto Donato?”

I nodded, and his grin widened.

I started down the hall. “Let’s go have a chat with Andreas.”

Jackson followed me through the house and down into the basement that looked like something out of a horror movie. The corridor was dark and dingy, and the door to the interrogation room was smeared crimson, the handle covered in sticky finger marks. Could no one clean up after themselves?

The overwhelming metallic scent of blood hit me the second we stepped inside. Andreas hung from a ceiling hook that went through his wrists. Through, because he had no hands to cuff.

My enforcer did love removing extremities. The bloody stumps of his wrists were bandaged purely to stop him from bleeding out. Still, blood tracked down his arms, streaming in rivulets over his body. As if that weren’t enough, he was covered in multiple cuts, deep slices that added to the crimson canvas that was Andreas’s skin.

Jackson never went easy on anyone, but sometimes—very occasionally—I pitied his victims. Not this one. The mafia was a business, but it was also family; it was personal. And this felt extremely fucking personal right now.

Rarely was I made to feel stupid, but he and Sergio Donato had made a fool of me. They’d put my family at risk, cost me men, very nearly cost me Tommy, who was like a brother to me. And Andreas well knew, blood was repaid in blood. He knew what we would do should he be discovered, and yet he still chose Donato. Was it so hard to be loyal?

Andreas’s head hung, and from the shallow rattle of his chest, death was calling his name.

“Did you at least get everything before he…” I waved a hand toward the man’s barely breathing form.

Jackson leaned against the blood-spattered wall. “Oh yeah. Sang like a canary the second he saw my knife.”

So the copious wounds and missing hands were just for fun then. Not that I blamed Jackson. Andreas deserved everything he got, and he’d receive no mercy from me.

Grabbing the rat’s blood-soaked hair, I lifted his head and slapped his cheek. He groaned and whimpered like the pussy he was. “The least you could do is die with a little dignity, Andreas. Even your wife wasn’t such a pussy.”

He moaned out a sob, openly weeping. The only thing worse than a traitor was one who couldn’t face the consequences of his actions when they bit him in the ass. “I gave you the opportunity to protect your family from Nero. Do you remember? I sat at that table and gave you a fucking out. So, not only are you a traitor to me but also to your wife and kids.”

And that might have been what pissed me off the most because I would never do that. No amount of money or threats could make me risk my family.

I could let him die. Leave him here to bleed out. But that was too easy. Rage beat away at me, demanding he suffer in the worst way. This man would shit on his brothers, aid in their deaths, risk his own innocent children…

“I hope they paid you well, Andreas.” I moved over to the metal cart in the corner of the room, picking up the gas canister. “You know how I kill rats.” In a way that sent a message that dissuaded any man from making the same mistake. Traitors’ deaths were a grizzly business.