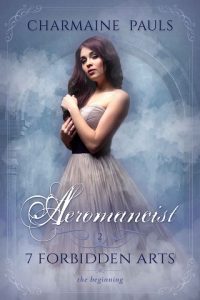 The glider in front of Lann Dreán dropped thirty feet, its left wing plunging toward the rugged peaks of the Santiago Andes Mountains. The Russian aeromancist tightened his fingers around his control stick in an involuntary reaction. Just in time, the erring pilot, Frank, righted the wings and caught a slipstream that carried the glider up.

Mudak. Frank’s passenger should be frightened out of her wits, not sounding like she’s having the time of her life, which may very well be her last minutes if Frank didn’t quit the jackass stunts.

“Can you go higher?” she asked Frank. “Faster?”

Damn her. She was ruining the usual peace Lann enjoyed when up in the air. He knew the slipstreams, winds, and thermals like a mother knew her baby, and when they were on the ground, he was going to give Frank a piece of his mind for endangering his passenger’s life. Of course it didn’t help that the little hell’s angel encouraged Frank.

Frank chuckled. “I’d like to show off, but I’ve got to work with the wind. Faster isn’t an option. Higher could get us killed.”

Frank was right. He was gliding on the wave lift that pushed off the mountain peaks, and he was at maximum altitude for what conditions allowed.

The click of her tongue was mocking. “They said you were the best.”

Lann snorted at that.

Frank’s glider dipped sideways. Too steep. The maneuver evoked an ecstatic female shriek. Lann didn’t have to check his instruments to know the risk was uncalculated.

When Frank leveled the yawning glider, it bumped as it hit a downward airstream. The woman’s exclamation wasn’t any less excited. Fuck. She didn’t realize the aircraft was heading for a nosedive. With a flick of his hand, Lann created a mini cyclone that reversed the flow. The glider stabilized. He wasn’t supposed to use his ability to manipulate air unless it was during an approved and formal mission, but, even if it would serve Frank right to go into a tailspin, he wasn’t going to let the halfwit sacrifice his passenger.

“Got it, Lann,” Frank said. “I’m trying to scare this kitten, but she’s doing serious damage to my ego.”

Frank straightened his glider with an abrupt movement, making the woman giggle. She was enjoying the rough ride. Lann wouldn’t mind taking her on his own kind of ride. Her obvious love for flying captivated him. No doubt he could take her faster and higher.

“I’m going in,” Frank said, making use of a colder air current to make his descent.

“We’ve been up for almost an hour,” Frank said. “Hate to disappoint you, but my time’s up.”

Lann wasn’t planning on going down so soon, but he requested landing clearance anyway. He steered the aircraft into the next down-current and pointed the nose in the direction of the club airfield.

His landing was a bit hard, but not because his hand was unsteady. His usually controlled temper threatened to explode. He needed to have a word with Frank.

The surge of adrenalin from the flight still rushed through his body as he lifted the dome and climbed down from the cockpit. Frank had taken the landing slot before him. His glider was already parked in the hangar, both seats empty.

Lann looked around for the pilot and his passenger. He spotted Frank where he leaned against the frame in the entrance of the hangar, gripping the wooden beam above him with one hand as he focused his attention on the female in front of him. That cocky male stance only portrayed one thing—sexual interest.

Whether the woman noticed or not, Lann couldn’t tell, because she had her back turned to him and he was too far away to hear what she was saying. Whatever it was, judging by Frank’s wolfish grin, he found it amusing. His reply made her laugh. She freed red, thick curls from a ponytail and tilted her face up at Frank as the idiot continued to spill whatever bullshit he was feeding her.

Lann pulled off his flying gloves and lifted the wing of the Glaser-Dirks DG-808 as he waited for a ground assistant to arrive. The back view he had of the little hell rider scored ten on all counts. Her shoulders were proud and her tight ass filled her faded jeans perfectly.

She cocked her hip and lifted her hand in greeting. “Thanks.”

The word drifted to Lann on the air, clear as a bell.

“Anytime, honey,” Frank called after her.

She skipped three steps backward, then turned and strode down the runway.

Lann watched her approach from under hooded eyes. Striking blue eyes. Luscious lips. Honey-bronze skin. The bounce in her step made that ruby-red hair move in time to the swing of her hips. As she neared, he noticed the flush on her cheeks and the gleam of satisfaction in her eyes.