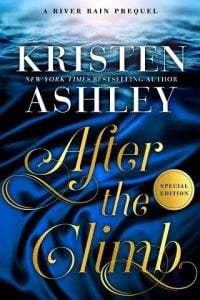 He stood beside Duncan and watched her go.

And as he watched her flounce away, all mad because Duncan was being a jerk, he knew he could watch her forever.

But she was walking away. They didn’t have forever. He knew that because, even though she was way down the creek before she made that turn into the woods, it seemed like it was all of a sudden that she was gone.

That was when he looked to his side and up, at Duncan.

Because Duncan was taller than him.

It wasn’t just being tall.

Duncan was a lot more “ers” than him.

And when Corey’s eyes got to Duncan’s head, he saw his best friend was still staring at the spot where she last was, like she was still there.

And Dun’s face was all weird.

He felt that weird.

Deep in his chest.

Like it’d been there all his life, even if he’d never felt it before.

It was a good weird.

Corey didn’t get it, but maybe it was the best weird ever.

“Why’d you have to do that?” Corey grumbled.

He didn’t have to say it twice.

Why did he say it twice?

And why did he keep watching that place where she’d gone?

That was when Duncan finally looked at him.

And she never would be.

My head came up when the Rolls made a turn and the road got bumpy.

We’d been following a mountain path for so long, the twists and turns, I’d been lulled. We were at least a half an hour, maybe longer, from the center of town.

Truth be told, to keep my mind from this upcoming meeting, I wished I didn’t get car sick when I focused on something while riding in a vehicle. I’d have been all over marathon texting one of my kids. Getting caught up on Insta. Playing that game I downloaded which I seemed to be able to get lost in for hours.

Hell, just last week, before I found out what had happened with Corey, my phone had warned I was at 10%. I’d looked at the time and it was two in the morning. I’d started playing when it was 8:30.

But then life changed.

I got the call.

Corey had killed himself.

Then I got other calls.

I needed to make a statement.

And, of course, being one of his dearest long-time friends, Imogen Swan, America’s sweetheart, had to have something public to say about it.

What to say about my beloved Corey?

The boy, and then man, who’d been in my life the longest.

There weren’t enough words in all the languages of the world to share how shattered I was that he’d taken his own life.

I closed my eyes tight, before I opened them and stared out the window at the thick trees we were (very slowly on this gravel road) passing.

Because this would be what Corey would do.

What was happening right now.

Me, on my way to visit Bowie.

Bowie hadn’t come to the funeral. I had no idea why. And I thought the worse of him for it.

Then again, it didn’t take much for me to think the worst of Bowie.

In grade school, all through high school, they’d been the best of friends.

The jock and the nerd.

But there you are.

I had no idea why.

Though, Bowie had told me, rather explicitly, if completely, tortuously and heartbreakingly erroneously, why he was done with me.

Therefore, it was only for Corey’s sake I would be in the back of that car right now, heading to Bowie’s house.

I knew he lived in Arizona, like I did.

I knew this because somehow, the fates had made him impossible to avoid.

Knowing Duncan was that close, it had honest to God been the only reason why I hesitated moving my family from LA to Phoenix.

But he didn’t live in Phoenix.

And I was done with the industry, the traffic, the mudslides and fires, and it bears repeating, the industry, but I did not want cold, snow or the possibility of days filled with fighting what humidity did to my hair.

I’d talked Tom into it.

Then we moved to Phoenix.

Suddenly, the landscape opened up, and I wasn’t the only one in the car that gasped. Rodney, my driver did too.

I clenched my teeth as my heart squeezed.

This would be what Duncan would pick if he had the money.

And he had the money.

So there he was.

Even with the lake surrounded by the trees and mountains being such a breathtaking vision, I couldn’t take my eyes off the house as the Rolls rounded the graveled drive and came to a stop at the bottom of the steps that led to the carved-wood front door.