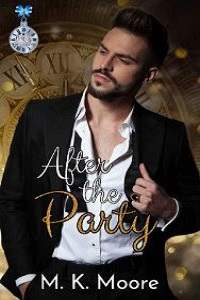 This fucking sucks, I think, as I walk the few miles into the town of Buck’s Creek, Iowa. My private jet just made an emergency landing at the municipal airstrip on my trip to Vegas from New York City. Every year my buddies, those that are still single, from college, and I head to a casino for an all-night poker game after a celebrity-filled New Year’s Eve party, but that won’t be happening now. Honestly, I presumed this would be the last trip since it was just down to three of us from the original ten. The other seven have moved on and gotten married; hell, two of them have been married twice in the ten years since college ended. I would have thought at thirty-two I’d be married with kids by now, but it just hasn’t happened yet.

Back to the issue at hand, the part we need for the plane won’t be here until Tuesday, due to the holiday, so for now, I am stuck. It really is the icing on the cake from the most fucked up year of anyone’s lives.

Following the airport attendant’s directions, I come upon Main Street, looking for the little inn. Instead, I walk into the midst of what can only be described as a block party. I haven’t seen a block party since I was a little kid on the streets of Bushwick. The second generation born in America; my paternal grandparents immigrated here from Spain in the fifties. It’s incredible what college and a career on Wall Street followed by state politics can do for you. I have higher aspirations in DC, but for now, I am content cooling it in the senate while I wait for my thirty-fifth birthday. As I said, I have a plan.

As I look around the quaint town, a genuine smile crosses my face for the first time in years. Everywhere I look, people are dressed up and dancing in the twenty-degree weather. It’s a sight, to be sure. Suddenly, an older grey-haired woman comes up to me.

“Alejandro is fine,” I say automatically.

“Alejandro, Roland called from the airport. I’m so sorry we didn’t have a taxi for you. We are limited here in Buck’s Creek, and they are all being used, New Year’s Eve and all.”

“Excellent, sir. I took the liberty of getting some rooms for you at the bed and breakfast. I am sure it’s nothing like the accommodations you are used to, but it’s clean and warm.” I understand what she’s trying to do, and I feel compelled to set her in the right direction. My upbringing was not full of luxuries. It was hard at times but full of love, and at the end of the day, that’s all that matters.

“Madame Mayor, please. I grew up in government housing in Brooklyn. Sometimes I didn’t have clean or warm. I definitely didn’t have both at the same time. I am not a coddled politician. I got into this to make a difference.”

“Of course. I apologize. I’ve never met anyone so… famous before.”

“Ma’am, I am just a man, I promise. Now, can you point me in the direction of some beers?” I ask chuckling. She laughs and gestures to the giant clock tower.

“You’ll find the makeshift bar over there. Your room key.” She hands me an actual key. The keychain says Buck's Creek B & B.

“Thank you," I reply, pocketing the key.

“Enjoy the party." At least I'm not overdressed.

I move away from the mayor toward the tower. When I get to the long row of tables set up with kegs and every bottle of liquor imaginable, I spot her—a tiny blonde who is carrying a baby. I offer up a prayer that she’s unmarried. That she can be mine.

Bypassing the bar, I head toward her. Her beauty is breathtaking. Her tight black dress makes me think thoughts surely every other man here has thought the same fucking things, and I find that I don’t like that.

“Hello,” she says without a hint of shyness. “You’re new around here.”

“I just arrived. Plane malfunction,” I say, shrugging. She looks at home with the baby in her arms. “You brought your baby to a party?” I ask, gesturing to the meticulously bundled up child.

“Not my baby,” she says, giggling. “This is my brother, Kyle. My mom is around here, somewhere. She’s the town’s only bartender, but since everyone’s here, kids are running around everywhere.”

“Brother? How old are you?” I ask, my prayers shifting to ones of her being of age. What the hell will I do if she’s not?

“Oh, I’m eighteen, but my mom was eighteen when she had me. She’s on her second husband now.”