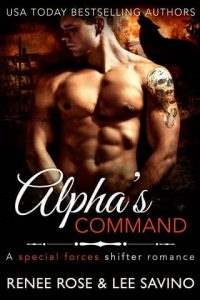 She’s a human. Forbidden. My brother’s widow. But deep down, my wolf believes she's mine.

Before my brother died, he made me swear to stand by his human mate and their son. It's been 10 years since his death, and I've done my best. I joined the military, got my sh*& straight.

I sent money but stayed away from Julia and my nephew. Stayed out of their life. She didn't need a screw-up like me hanging around.

That was the lie I told myself. The truth was, I couldn’t resolve my attraction to her. And I can't dishonor my brother's memory by claiming his wife.

But now her pup has entered puberty. He’s become a wolf. He needs me there to guide and protect him.

Julia hasn't forgiven me for the years I stayed away, but this time I'll do right by her. I’d do anything for the two of them.

I prowl on four paws through the pine trees, closing in on the house. It’s a small split-level, set back from the road and surrounded by trees. The lot’s on the end of a cul-de-sac, and the backyard abuts the Coconino National Forest. Plenty of wilderness, plenty of cover to run. My wolf approves.

So did my brother when he bought it fourteen years ago and settled with his newly pregnant mate. When life was good and the future was bright.

Then he died, and everything changed.

Almost everything. The house still looks the same. She’s taken good care of it. The paint has faded, and the roof will need replacing, but otherwise, it’s frozen in time.

The scents are the same—juniper and boxelder, pine.

The wind picks up, and I catch another scent, one I’m trying not to notice. It curls into my senses, a delicious perfume that makes my fangs sharpen, and my mouth waters.

My wolf wants to cross the fifty feet separating us from the house, to find the source of the perfume and bask in it.

Instead, I turn and trot on silent paws past the house, up the hill where a Ponderosa pine stretches to the sky. I still remember the day we climbed the hill. I admired the view of Mount Elden, but my brother only had eyes for his house. For his human wife and young son playing on the patio.

Promise me, my brother demanded all those years ago. He had an army training position at Camp Navajo, but he’d been sought out for active duty by someone who knew what he was. Someone who needed his kind in the field. Just for a short-term mission.

I rub against the pine bark, searching for any lingering scent of him.

And then I catch it–a rich male wolf musk. It smells like my brother, but he’s dead. Which means it must belong to Geo, his son.

My nephew’s been running through these woods.

That means he’s shifted. We weren’t sure whether he would. Mixing shifter blood with a human’s can wipe out the shifting ability in offspring, but puberty hormones must’ve kicked Geo’s wolf-shifter genes to life.

Which means I can no longer stay away. Julia won’t know how to guide her son through this.

Looking closer, I catch sight of claw marks on the tree, like Geo was tormented by his new shape. Frustrated and alone.

Deke expects me at the job site, and if I’m late, he’ll be pissed. More pissed than usual. I’ll have to come back in the morning, as soon as this mission is complete.

I lope down the hill and head the long way around the house. A light turns on in the upstairs bedroom, and for a moment, a woman’s silhouette appears. Everything in me longs to change plans and head back to the house. Make sure the door is locked. Make sure she’s safe.

Instead, I turn and run away from temptation.

Away from the only woman I’ve ever wanted.

The only woman I can’t have.

I zoom up to the row of abandoned warehouses at midnight. Right on time.

Deke waits in an old van painted matte black. The sort of van that workmen use… or kidnappers. We got the van after a mission that involved a hostage situation if I remember correctly.

I park my bike and rap on the van’s side door. “Hey, man, got any free candy?”

Deke rolls down the window but doesn’t answer–just frowns at me. He’s got “resting murder face” as Lana, Teddy’s new mate, likes to call it.

“You look like a serial killer,” I tell him. He glowers harder. “What? It’s a compliment.”

“Why were you late?” he growls. “You left Taos before I did.”