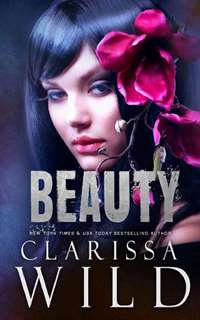 I thought I could escape the Beast … but he already devoured my heart.
When the Beast took me and dragged me back to his cell, I thought my life was over.
In the darkness, he watched me.
Yearned for me.
Tasted me.
He loved my scars, called me a beauty …
Made me irrevocably his.
Until his owner finally let him out …
And his final task was to destroy my father.
The only thing that stood between them was me.
Faced with an impossible choice, I run.
But even the beauty can’t escape the claws of the Beast.

“Run For Your Life” by Black Red Gold

“Afraid” by The Neighbourhood

“Take Me Apart” by SYML

“How Villains Are Made” by Madalen Duke

“Black” by The Soft Moon

“Cool For Chaos” by Nostalghia

“The First I Love You” by Kyle Dixon & Michael Stein

“In The Woods Somewhere” by Hozier

“The Unknown” by Dirty South

“Take Me Apart” by SYML

In my purple dress, I run as hard as I can without looking back.

Into the darkness, into my biggest fear.

Even though tears run freely across my cheeks and my legs quake from the adrenaline, I keep going, far beyond the doors to the warehouse, across the pier, and into a narrow alley. I zigzag between the buildings. Ignoring the pain in my feet and muscles, I keep going, past all the warehouses, until I finally reach a road.

Pausing, I take a huge breath while bent over with my hands on my knees.

I gaze down at the pavement and at the salty droplets that slowly begin to cover it. Each one of those specks is a scream swallowed back down.

Don’t break down. Not yet.

I blow out a big breath and continue running, pushing back the sting of regret.

I have to keep going.

Looking around, I only see warehouses and giant dumpsters. To the left, behind all the alleys, is an endless sea.

The voice comes from behind one of the dumpsters. And it’s definitely a guy, but he sounds like a mess.

Should I see who’s behind it? Or run like hell?

The same guy groans in pain.

How could I ignore that?

I sigh out loud but quickly make my way to the dumpsters to my right. My eyes widen the second I spot who’s lying in the rubble.

“Papa,” I mutter, and I rush over to him, only to stop mere inches away when our eyes connect, and I remember what he’d said to me.

I don’t even want her. I never did.

I swallow away the lump in my throat.

His body contains gashes and bruises from the torture Lex’s men did to him. God knows what else they subjected him to. He looks completely spent.

“Help me.” The visceral pain in his voice is hard to take.

He reaches for me but never comes close as his hand drops down to his body in defeat. And I blink away a couple of my tears.

I hate him for what he said.

But he’s still my father.

And he’s begging for help.

I push away the shame and kneel in front of him.

“Please … help me stand,” he murmurs.

I sigh and nod. Then I place my arm underneath his shoulder and help him get up from the ground.

He groans in pain but allows me to move him. Every step he takes weighs down on me, but I do my best to carry him as we walk away from the alley. It doesn’t take him long to get the hang of walking in pain. Every once in a while, he hisses and clamps his teeth, his face contorting from the agony, but it does little to my frozen heart.

Still, I couldn’t leave him there to die.

My pupils dilate, and I glare up beyond the road we’re on.

“Duck,” I bark at my father, who immediately hides behind a big machine standing outside a warehouse. I help him stay put without falling over, but his sheer weight strains my muscles.

Sweat drops roll all over my face and back. There’s no time to process what happened or think about any of the wounds on my body or my father’s. And no time to think about Beast being left alone to die.

I gulp down my nerves as several guards run past us, oblivious to our location.

I can’t let all the effort Beast did to save me go in vain.