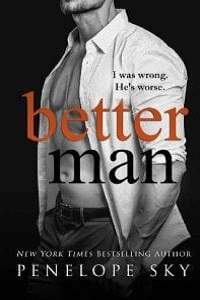 When Grave didn’t come for me, I feared he’d knocked his head against the hull of the ship and drowned. I was so happy when I escaped his grasp and found Cauldron, and I could hardly believe that I regretted that decision. Grave was a fucking walk in the park compared to this asshole.

I tried to escape a few times, creeping through the house to the front door, but now Hugo locked my bedroom at night, so I was stuck there until morning. My phone was taken away so I couldn’t call for help. Couldn’t figure out if Grave was still alive.

My only way out of there was the patio. I was three stories off the ground, and a fall would probably break a leg and an arm, might even kill me, but it was my only way out at this point. Cauldron and I hadn’t set eyes on each other since our conversation after the yacht party, and perhaps he hoped distance would make my heart grow fonder.

I took all the sheets off my bed, even my pillowcases, and knotted the corners to make a rope. I tied one end to the bars that wrapped around the outside of the patio and gave it a couple tugs with my hands. When I looked over the edge, I saw a couple pots of flowers and the cobblestone path that wrapped around the property. If I jumped down and the sheets came apart…that would be a nasty fall.

“Maybe I should think this through…” I stared at the ground for a while before a brilliant idea sprang into my mind. I returned to the bedroom and pulled the mattress off the top of the bed and pushed it onto the balcony. Anyone directly below me could probably hear all the ruckus I was making, but there seemed to be no one there. Otherwise, they’d have come running by now.

I tipped the mattress over the edge and tried to aim it as best as I could before it slipped and fell forty feet below. For something so soft, it made a distinct thud when it struck the ground. I sucked in a breath between my closed teeth and listened, hoping no one had heard that.

I tugged on the sheets again before I climbed over the rail and prepared to let my feet leave the edge. I looked down again before I took a deep breath. A girl like me wasn’t afraid of much, but even with a mattress below, I could break every bone in my body…and then I’d never get away.

“Are you fucking crazy?”

He appeared in the open doors of the patio, shirtless in his sweatpants, pissed off.

“Shit.” There was no time to dawdle, so I released the edge and put all my weight on the sheets.

It held, but the knot above me was already starting to loosen.

“Go, go, go,” I said under my breath, trying to move as quickly as possible without causing my body to swing forward and backward.

I felt the rope give as the sheets started to come undone.

“Stop moving!” Cauldron’s head appeared between the bars, and his strong hands grabbed the sheets below the loosening knot. He grabbed it just in time, holding my weight with his arms because the sheets’ attachment to the patio bars was gone. “Get your ass back up here.”

I continued my descent to the bottom. “Thanks for the hand.”

I quickly climbed down to the very bottom then let go, falling ten feet onto the mattress below. It cushioned my landing exactly as I’d intended. I was able to get to my feet without even a sore ass. When I looked up to the balcony, Cauldron was already gone.

“Gotta hurry.” I’d already tried climbing the walls at the front gate several times, but the security was tightest at the access points. This time, I decided to go west, where there was just foliage. Maybe there was another house nearby. No idea. The limestone wall was higher here than it was at the entrance, so I had my work cut out for me as I dug my fingertips into the grooves between the rocks and hoisted my body up higher.

I couldn’t bring any of my things with me besides some money and my ID, but it was better than staying. I continued to climb, and when I was halfway up, I heard Cauldron behind me. “You could have broken your neck, you know that?”

“Well, that’s how much I hate you.” I kept my focus on the wall and continued climbing. “Take it as a compliment.”

“Get down from there.”

“The ground on the other side is uneven. You’ll break your ankle.”

He really turned angry. “Get your ass down here, or I’ll break your ankle myself.”