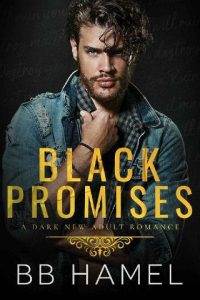 The turn of a screw. The twist of a knife. The moment that changes the course of a life. Everyone likes to imagine those moments lead to a bright, shiny, beautiful future.

There was nothing bright or shiny or beautiful about the moment that changed everything for me.

Or the series of moments. Small choices that could’ve led me somewhere better.

My nana called them miracles.

My mother called them coincidences.

I called them hell.

One of those moments happened on a bright fall day early in the first semester of my sophomore year of college.

It was a gorgeous afternoon. The times that stuck with me, they were always perfect. Reasonable humidity, lots of sunshine. The breeze blew through the perfectly manicured lawn of Blackwoods College, and Robyn skipped out ahead, grinning back at me, spreading her arms wide.

I couldn’t help but smile back. Her enthusiasm was infectious, and I fed off it like a thirsty vampire. I loved positive people, and I worked hard to surround myself only with positive things.

But goodness was an illusion, of course.

An illusion I desperately clung to.

I sighed dramatically and caught up with Robyn. I leaned against her shoulder, clinging to her arm, and bumped her with my hip.

“You missed this place, didn’t you?”

“Summer is basically a nightmare.”

“I know what you mean. Months stuck at home was like standing in lava for ten years.”

Robyn rolled her eyes. “You can be so dramatic.”

“I know. At least we’re back, right? Our second year of college.”

“Things are already looking up.”

I’d known Robyn since high school. We’d met in art class when we were freshmen and became best friends instantly. Her parents were Blackwoods alumni, which had helped her get in when it came time to apply, but her sterling grades and extracurriculars had made her a shoo-in.

By comparison, I was lucky. I’d had middling grades and only played in the band for two years, but I’d won an art contest by sewing an enormous tapestry made from destroyed vintage clothing, and that had bumped my portfolio up enough to let me sneak into the fine arts program. I was also a scholarship student since my parents weren’t nearly as loaded as Robyn’s.

We came from different worlds, but that never seemed to matter. We’d applied to all the same schools, and Blackwoods was the only one where we both got in. That had made college a pretty easy decision.

The first year had gone fine. Nothing exciting had happened. I acclimated to taking the commute from our little suburban Philadelphia town down to our little liberal arts college tucked away in the woods of Media, Pennsylvania. We pretended like we were grown-up and carefree, when we both still lived at home, and both still had plenty to worry about.

But not yet. It was a nice day, and we were glad to be on campus again. Robyn steered us toward the Whitman building, through a crowd of slow-walking hipster kids and down a small side pathway.

Blackwoods was the most elite school in the area, but it was also the smallest. It was a well-kept secret, and I got the sense that the administration and faculty liked it that way. We existed in a bubble, and the world outside rarely intruded on our pristine green lawns and the gothic architecture. The place looked and acted like it was an Ivy League institution, but really it was just another regional school that pumped out qualified graduates like a machine.

I didn’t care. I was still in love with the sun-dappled stone buildings and the tall windows with their arched openings and the stained glass that illuminated the floor in multicolored hues.

To me, Blackwoods was a paradise.

It wouldn’t always be. But in those days, I still thought it was heaven.

“Oh, crap.” Robyn slowed down. I looked over toward the end of the path and spotted four people walking toward us.

I sucked in a breath. The boy in front was Addler Montgomery, and he looked exactly like his name suggested: perfectly coiffed hair, preppy designer clothes, impeccable teeth, square jaw, eyes like liquid amber. He looked like he’d stumbled out of an Abercrombie catalog or something like that, and every girl on campus was dying to get a piece of him. Addler was the most recent up-and-coming quarterback for the football team, and there were rumors that he’d take over the starting job before the end of the current season.

Behind him was Des Willis. He was handsome, boyish, easy smile, slacker attitude, but muscular and toned. Des was a star wide receiver, a big guy with a big attitude, and a notorious playboy. His smile got bigger when he spotted the pair of us in his path, like a hungry hyena sneaking up on a quiet, prey-filled watering hole.

Next was Calvin Solar, with his cropped hair and bright blue eyes. He seemed bored and was constantly glued to his phone. And if rumors could be believed, he was the only guy on campus with a connection to seriously good drugs—not that I was into snorting coke in frat boy bathrooms.