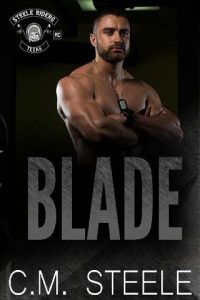 Nervous anticipation fills me all morning, giving me the jitters as if I’ve had more than one cup of coffee. First, I brush my long, brown hair behind my ears with my shaky fingers as if somehow that will calm me down. Next, I anxiously flatten the material of my apron with my hands. The bakery’s empty as the mad morning rush has come and gone, and yet, I’m still on edge. I know the reason for my anxiety, but there is no cure for it.

Blade should be coming in today with Penny, and it’s the highlight of my week every single time. He has captivated me, from his wide, six-two, muscular frame, to his olive skin tone and light eyes that always feel as though they see straight through to my heart.

Thinking about Blade sends me into a daydream every single time. I imagine a life with him and a house full of small children. Then, I remember the fact that he thinks I’m too young for him. I know I am, but my body doesn’t agree, even after knowing he doesn’t want me. Last week, I overheard his conversation about me with his sister. He’s over a decade older than me, and while I don’t give a damn, he does. His attraction to me is nothing compared to mine for him as he can easily ignore it because of something silly like age. I’m an adult, so it’s not like he’d get into trouble by fucking me.

A sigh escapes my lips as I lean on the counter and stare out the front window. I’m not sure how long I can go on being around Blade. It’s getting hard, and my soul can’t push him out even though we’ve hardly spoken to each other. It’s been a month of unspoken words and powerful looks that make me crave him.

A timer goes off in the back, reminding me that Blade’s fresh brownies are ready to come out, just in time for his arrival. He’s ordered them from day one and knowing him, he’ll order more. I enter the kitchen, slip on a pair of oven mitts, pull out the tray, and then set them on the rack to cool. I let out a moan as the sweet chocolate smell hits my nose, and my mind automatically goes to Blade’s lips, wondering if he tastes the same.

Once I have everything out of the ovens, I tug off my oven mitts and set them on the counter.

“Okay,” she says from Penny’s office. She’s working on new signage for next week. As soon as I’m in the storefront, I make my way over to the large window and steal a peek outside. I see his truck pull up, and my heart goes wildly out of control. Blade’s coming to the bakery. I mentally squeal and run back behind the counter like I’m not even remotely stalking him. Taking a deep breath, I try to relax.

For a month now, I’ve watched Blade come and go from the shop as he silently monitors the place. His eyes meet mine more times than I can count, but I do my best to avoid his gaze because I’m not the kind of woman he’s probably used to. Well, of course I’m not. According to him, I’m just a baby.

I may seem mousy, but in reality, I’m a social butterfly until Blade comes around. He makes me so extremely nervous that I forget how to speak.

A minute or two ticks by and strangely, they’re not in the store yet. I move toward the front window again to see what’s keeping them, and I gasp as I see the scene unfold around me. Blade has a man down and then more Riders show up, surrounding the guy. Penny’s behind him, being shielded as she loses the color in her face.

“What’s going on?” I cry out as the door opens and they come inside.

Blade’s eyes are glued to mine with a sense of regret, if I’m reading him correctly. “Just a fool looking to rob us. Please don’t worry about it, Ms. Walker.” Oh my God, he spoke to me. He’s barely uttered a word to me that isn’t about his order for a brownie. I flush, feeling faint, but I see that Penny’s looking a little green around the gills, so I pull myself together.