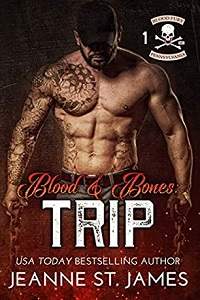 “Sometimes you have to burn yourself to the ground

before you can rise like a phoenix from the ashes.”

Trip stood in the middle of the deserted building, shaking his head, wondering if it was worth the fucking hassle to start the club back up. To reclaim its territory.

But what other fucking choice did he have?

He’d already had it set in his mind, not only to do it, but to do it right this time.

He wouldn’t let his father’s club, which died a violent death, just remain a memory. And a bad one at that.

Because he had nothing.

Except his granddaddy’s run-down farm, a barn full of farm equipment he had no clue how to use and didn’t want to, and the abandoned warehouse he was currently standing in on the outskirts of town.

While he was in prison, his lawyer had shown up and read him his granddaddy’s will.

Yeah. He got everything.

Trip was sure his brother wasn’t happy about that, if he even knew.

But most likely Granddaddy had made up the will when Trip was still doing time in the service and not doing it behind bars. Unlike Sig who had been in and out of county jail, or the state pen, off and on since he turned eighteen.

But now here he stood. In an empty building, feeling fucking overwhelmed. But still, it was something.

And something was better than nothing.

He also had new ink on his back and an old cut in his hand.

The leather was worn, the rockers and patches on it dirty. All except one.

One rectangular patch on the front had been torn off by his own fingers after using the point of his buck knife to loosen the threads. The patch that used to say “Buck” was now replaced with one that said “Trip.” But above it, the patch that had deemed Buck as president remained. That now belonged to Trip.

He’d also used that same knife to remove the 1% diamond patch off the back. He wouldn’t need that one anymore.

The club used to be outlaw. But Trip was determined to keep it above board. For the most part.

He’d spent many a night down in Shadow Valley talking with the members of the Dirty Angels MC, soaking up everything their prez named Z told him. Learning how to rebuild Blood Fury stronger than ever. How to keep the money flowing into the club’s coffers.

One way to do that was to keep the members out of prison and, even better, keep them breathing.

Dead or incarcerated members weren’t any good to a club.

And there had been too many of those in the Blood Fury MC in the past. It had been its downfall.

So, they had to play the game. Keep shit on the up and up as best as they could. Become a powerful force, strong enough to withstand the occasional bump in the road.

He had no fucking clue how he was going to pull it off, but he would take the advice he was given and do his fucking best.

He scrubbed a hand through his long hair before tucking it up under his baseball cap, blowing out a loud breath and shrugging on his cut.

It wasn’t his father’s any longer.

This club was no longer his father’s, either.

This world, even as broken as it was, now belonged to Trip.

It was his and he wouldn’t let anyone destroy it again.

The Fury was about to rise once more. This time stronger and smarter.

The rumble of his straight pipes died as he turned the key and shut off his sled.

Instead of the roar of his exhaust, he now heard the drilling and hammering of a whole crew of local Amish folk.

The “Plain People” knew how to get shit done fast, get it done right and get it done cheap. Thank fuck they were available. Luckily, they were hungry for the work, since the economy had been slow in the area lately. Which meant they’d cut him an extra sweet deal, which he appreciated since with all the construction he was getting done, his money was starting to run low.

They also appreciated the extra work Trip had been throwing their way, too. Because they all had a bunch of mouths to feed and families to raise.

Hell, they even had the women and children out here on Trip’s farm working, too. The kids were scurrying around getting whatever was asked for. Nails, tools, water, whatever. The women would show up at lunchtime in black vans driven by Mennonites, feed their men and boys, socialize for a bit and then disappear.

Most of the younger women eyeballed Trip when he was around. He’d tipped his head to a couple of them and they’d run off giggling and whispering.