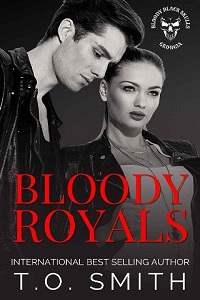 He’s bad for her in every sense of the word.
A criminal.
An enemy.
A rival.
She’s the princess of the Bloody Royals MC.
Off-limits.
Forbidden.
An annoyance.
Disaster will drive them together.
When Travis kidnaps Katie Holland, his world gets flipped upside down in more ways than one.
She’s mouthy and works on every nerve in his body, but neither of them can resist the sexual tension between them.
And when it comes time to let her go back home, Travis realizes he can’t release his hold on her.
Because the very people she calls family are the very people working to make her become silent.
And he’ll cross whatever boundaries he needs to keep the princess safe.

It was the first thing I noticed when I ripped my eyes open, leaving me to wonder for a moment if my eyes had ever really been closed in the first place.

I sat stock-still, taking in what I could through my other senses. My legs and arms were tied to a chair—a hard one at that, considering my ass was sore. I tried wiggling a little, taking note that whoever had tied me to this chair had done a damn good job. I had zero wiggle room.

There was a gag in my mouth, which didn’t surprise me. I didn’t know how I ended up here, so chances were, I’d done my classic Katie thing and ran my mouth.

Drawing in a deep breath through my nose, I closed my eyes, trying to think of the last thing I could remember. Zachary Taylor.

That name alone sent chills down my spine as well as made me feel sick to my stomach.

I blocked that shit from my mind, deciding not to focus on that. If that was the last thing I remembered, then I had either been kidnapped not too long after that incident, or I’d been hit so hard I lost some of my memory.

But my head didn’t hurt, which kind of ruled out the last option.

My stomach grumbled, and I rolled my eyes. Of course, I was fucking hungry. It seemed no matter how shitty of a situation I got myself in, I could always seem to be hungry.

It was a curse, really.

The creaking of a door reached my ears before I heard it click shut a moment later. I held my breath for a moment, trying to make out some other sound. No other sound came.

But a fucking light flickered on overhead.

My curse was muffled by my gag as I squinted, trying to give my eyes time to adjust. I quickly took in what I could. The walls were concrete and bare. There were some pipes running along the wall, and there was a set of stairs off to my right.

The basement seemed to be neglected—never used—apart from me now being in it.

Voices flooded into the room at the same time that feet pounded down the stairs, bringing the once oppressing room to life. Three guys came around the wall, all of them built, their faces expressionless, all of them staring at me.

Fear sliced through my veins. I locked it away, channeling it as I had been raised to do since I was a small child. It was a survival mechanism that had been ingrained into me from the moment I was old enough to understand the kind of life I had been born into.

I quickly took in the three men in front of me, drilling their features into my head with a vivid picture. One of the guys was olive-skinned, his hair cut into a buzz cut, tattoos swirling over his scalp. He was muscular—beefy—like he worked out a lot in his spare time. His eyes were a deep, dark chocolate color, but they were cold, void of any real emotion.

One of the other guys had longer, brown hair that slightly hung into his blue eyes. He wasn’t as muscular as the olive-skinned guy, but the look he gave everything around him sent chills down my spine. He was dangerous; that much was clear.

The other guy really caught my attention, and I hated that I found him extremely attractive.

Dirty blonde hair and dark eyes sucked me in, holding me captive in his gaze. His jawline was strong—sharp lines that made him look absolutely perfect. His cheekbones were high on his face, giving him a very slim appearance that matched the rest of his body.

He was tall with a lankier build, but when he moved, his muscles flexed, letting me know that just because he was smaller than the other two, he held his own power, which was even more dangerous.

The man I had been admiring stepped up so that he was right in front of me. I quickly looked down, showing submission. I had to play this smart. I knew I could handle my own, but not while I was tied to a chair. Right now, I was at a disadvantage.