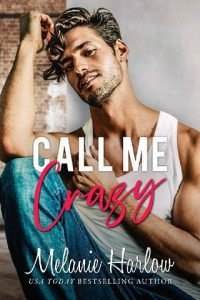 There comes a day in a man’s life when he enters a room with hope in his heart and a ring in his pocket, fully prepared to get down on one knee. To pledge his eternal devotion. To take his soul mate’s hand in his and pop the question, promising to love, honor, and cherish her forever and ever, until death do them part, amen.

This was not that day.

However, I did have a ring in my pocket—a very nice one-point-four carat diamond solitaire on a gold band. I’d gotten a great deal on it because my cousin Paulie worked at the jewelry store, and some poor guy had just returned it. Sure, it was engraved with someone else’s name, but Paulie had assured me that could be removed.

In hindsight, I probably should have done that before I proposed. But I wasn’t thinking straight—I needed a wife, and I needed one fast.

It was all because of this ridiculous tradition in my family. In order to inherit the family construction business, Moretti & Sons, the oldest son has to be “settled down” with a wife and preferably a kid or two by the time he’s thirty-five. My father, who was sixty-eight years old and ready to retire, had been threatening to leave the business to my younger brother Pietro for years now.

He might be thirty-two and married with his third bambino on the way, but he was never on time, he was always disorganized, and he was way too easygoing to be an effective manager. Contractors, suppliers, and clients were constantly walking all over him because he hated confrontation.

Don’t get me wrong, he’s my kid brother and I fucking love the guy—and my niece and nephew are awesome—but he’s not the one you want running your multi-million-dollar firm.

At least, I thought I did.

But that was before I proposed.

I’d been seeing Reina for about three months, which I thought was a pretty decent amount of time to spend with someone, although I might not be the best judge of that since long-term commitment has never been my thing. Not that I was a jerk about it—I always made sure a woman understood exactly what I could offer her (one hell of a good time), and what I couldn’t (anything resembling a relationship).

But as thirty-five closed in on me and my father’s threats started to get more real, I realized it was time to man up and put a ring on someone’s finger.

Reina seemed as good a candidate for Mrs. Moretti as anyone. She was a little young—she’d just turned twenty-one yesterday, in fact—a little too attached to her phone, and sometimes I had no fucking idea what she was talking about, but she checked all the other boxes for me. She was beautiful, she wasn’t crazy, she got along with her family, and her mother was in her late forties and still looked good. What more could I ask for?

She checked my parents’ boxes too: Catholic. Italian. My Nonna knew her Nonna.

Was I in love with her? No. But love was something that developed over time, wasn’t it? I wasn’t exactly sure, since I’d never been in love, but it seemed to me like something you settled into, like a couch that’s a little stiff at first but grows more comfortable the more you sit on it. I figured we’d get there eventually.

The important thing right now was to secure my place at the top of Moretti & Sons, where I’d worked every damn day of my life since I was fourteen years old. I hadn’t put all that blood, sweat, and tears into growing the business just to see it go to Pietro, and I sure as hell wasn’t about to be the only oldest son in five generations who failed to inherit. If I had to get a wife and kid to do it, I’d get myself a wife and kid.