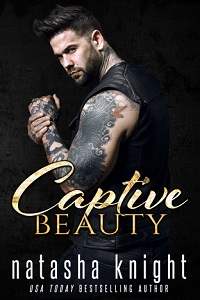 He’s watching me. I know he is. He has cameras everywhere. Why wouldn’t he have one here? In this, the “special” room? He told me he likes to keep an eye on his things. And that’s what I am. A thing. A possession.

And today I fucked up.

Today he’ll take it out of my skin.

I shudder with the thought. With the knowledge of what I know is coming.

I’ll fight him. I wonder if he expects me to. Wants me to, even. All I know is I can’t submit to him. I can’t let him break me.

But I am breaking. Little by little.

I wonder if that’s why he took me.

This is a game to him. My life is a game.

I hug my knees to myself. This room is so cold, unlike the others.

I pull the blanket up around me, as much for the cold as for protection. It’s not like I can hide my fear. He knows. He knows the real truth. Knows everything now.

My dress is torn and I’m barefoot. He took my shoes away when he put me here. I guess the heels could be used as a weapon. As if I could somehow manage to overpower him.

I try to swallow but the lump in my throat makes it impossible. I’m scared and I hate it. I don’t want to admit it. Not even to myself.

Tears wet my eyes but before they have a chance to fall, I cover them with my hands and rub them away. I don’t want him to see my weakness. He gets off on it.

I did this. I pushed him. And I can survive this. I fucking have to.

It’s when I’m giving myself that ridiculous pep talk that I hear his footfalls in the hallway. Hear his voice, muffled so I can’t make out what he says. Probably dismissing Hugo, his fucking henchman. Like he needs one.

Every hair on my body stands on end when he slides the key into the lock. When he turns it. And when he pushes the door open, it takes all I have not to crumple. Not to cave.

It takes all I have to stand and ready myself for battle against this beast of a man.

She claims I took her, but that’s not the whole truth.

I gave her a choice. She made it.

Someone needed to be punished. It didn’t need to be her. She chose this. Chose to be here.

Well, okay, not right here. Not like this. Standing against the far wall, her pretty, jade eyes wide with fear, the delicate skin around them pink from tears.

And she should be.

I warned her and she fucked up.

I take her in, pretty in pink. Pretty Priscilla. Even with her hair a mess. Her mascara a black smear across her face. Her dress ruined. She’s scared shitless, but she’s defiant. I like that about her. Like her fire.

It makes my dick hard.

I close the door but don’t bother locking it. No need. She’s not walking out of here tonight. I’ll be carrying her when I’m through.

When I take a step, she makes a sound, something like a frightened little rabbit would make if they could make sound. Her hands are flat against the wall behind her. It’s like she’s trying to melt into it.

“I guess we were always going to end up here,” I say.

She has no response apart from the sudden trembling of her body. She wraps her arms around herself. I can even hear her teeth chatter. She’s too proud to beg though. Beg me for mercy. I respect her for that. But I do like the idea of her on her knees at my feet, clinging to me, pleading with me to spare her this one thing.

I slide off my suit jacket and hang it over the back of the chair. I watch her reflection in the mirror as I take off one cuff link, then the other, and set them both on the table. I’m rolling up my sleeves when I return my attention to her. Her eyes slide to my forearms. My hands.

She looks up at me.

I’m not paying attention when I step off the elevator on the sixth floor of my brother, Jones’s, apartment building. My phone just ran out of charge and I’m digging in my bag for the battery pack. The scent of curry coming from 605 is as familiar as the sound of the television playing too loud from 602, and the baby crying in 601.

Jones and I have a standing dinner date the first Wednesday of every month. Apart from that night, unless he needs something, we don’t see each other. I left him a voicemail earlier to meet me in the lobby, but he wasn’t there so I had to come up to get him. At least the rain had let up when I’d made the dash into the entrance, but from the sound of water pelting the window at the end of the hallway, it’s picked up again.