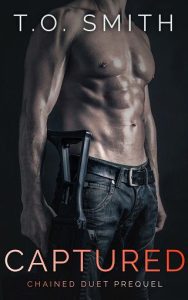 I knew from the moment I met him that darkness lurked just beneath his surface.
But I was intrigued.
I was warned against him.
But I didn’t heed anyone’s warnings.
I dove headfirst into his world, ignoring my own mind screaming at me to run the other way.
Damien was deadly, dark, and dangerous.
And I was about to find out just how much.

Some girls dream about bad boys. They read about them. Fantasize about them. Wonder what it would be like to change one.

I was never one of those girls.

I wasn’t stupid. I wasn’t naïve. I knew what bad boys were capable of.

They were monsters. There was no changing them. They were cold, ruthless, and deadly.

They were the real-life versions of the things that went bump in the night when we were children.

. . . I should have known from our first encounter what kind of man he was.

I should have saved myself right then and there.

Damien was cruel. A monster. A criminal. Deadly. Dark. Dangerous.

But even after he continuously proved that to me over and over, I continued to fall for him.

Because I turned into one of those girls. I thought I could change him—save him.

But the devil already owned his soul.

And now, he was going to own mine.

There are some things a girl can’t live without. Some can’t survive without makeup. Others have to have their best friend.

Me? I just needed coffee.

Lacie rolled her eyes at me when she saw the iced coffee in my hand. “It’s a wonder you’re not diabetic with all that sugar you have them put in there,” she reprimanded.

I rolled my eyes. “A girl can’t survive without her coffee.”

“Wrong,” Lacie corrected me. “I can survive without my coffee. As long as I’ve got you, I’m good. You on the other hand?” She snorted. “I fear if you had to choose between me and coffee, you’d choose that damned coffee.”

See? Some girls needed their best friends. Lacie was one of those girls.

Coffee was my savior each and every day. I would starve before I ever had to start my day without my coffee. I’ve done it before when funds were tight. Coffee always won.

Suddenly, Lacie cursed and quickly shoved her phone into her pocket, almost spilling her coffee in the process when her elbow bumped it. I arched a brow at her in question. “I have an appointment with a tutor before my class starts, and I completely forgot,” she rushed out. She leaned over and quickly hugged me in parting before she ran off, her sneakers slapping against the pavement.

I laughed softly. That was Lacie for you. She was always forgetting some kind of appointment she made, having to rush off at the last second to make it to where she needed to be. But I loved her, nonetheless.

I walked towards the exit, deciding to take a more scenic route to my first class of the morning since Lacie and I weren’t spending our morning together like usual. Though it sucked, it gave me the opportunity to enjoy nature and the morning for once, though I certainly wasn’t a morning person at all. But since I was already up and awake, I may as well.

I pulled out my phone, intending to read while I walked, since not many people were up and about this time of morning, especially on the route I was planning to take. Normally, this route didn’t get used until later in the day when cheating guys and girls wanted a quick place to make out—or fuck.

But luck wasn’t on my side that morning.

I shrieked when someone bumped into me, knocking both my phone and my coffee out of my hands. I stared in horror at the ground.

“Are you fucking kidding me?!” I exploded, snapping my head up to glare at the person who had bumped into me.

My breath caught in my throat as soon as my eyes landed on his face. He was fucking gorgeous with dark hair that curled slightly over his forehead. His blue eyes were almost hypnotizing, sucking me into his force field without any effort on his part.

“Sorry,” he apologized. He reached down and grabbed my phone, handing it to me. The screen was shattered, but I wasn’t worried about that. It still worked when I swiped my thumb across the screen.

However, my spilled, delicious coffee was now no longer fucking useful to me.

“I’ll replace your phone,” he offered.

I scowled at him. “What about my fucking coffee?” I demanded, now completely irate. I hadn’t even had a sip of it. “Coffee—fucking wasted because you can’t watch where the fuck you’re going.”

His lips twitched with amusement all while anger flashed in his eyes. But I didn’t back down. Like fuck was I backing down when my coffee lay splattered and useless on the fucking ground at my feet. “Lady, you were the one looking at your phone.”