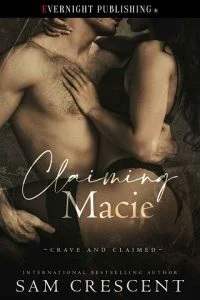 Wilson Fitz let himself into the cheap diner, shaking off the cold and snow that had fallen when he’d walked the few feet from his car. The place wasn’t too busy, which was a surprise. Considering how many restaurants were in the area, he figured this one would struggle. The food was what kept this place on top. Not the décor, which seemed like it had taken a step down from horror movie land.

The moment he stepped inside, he saw her. The only reason he came to this place. Macie Green sat at the counter, several books spread out, a cup of coffee to one side, and a furrow between her brows.

He should back away, leave this blasted diner, and never see her again. She was way too young. She was twenty-two years old, so sweet, so kind, and the world just kept fucking her over, left, right, and center. Like now, she had been diagnosed dyslexic many years ago. She had opened up to him late one night and told him every single detail of her life. So foolish. She had no idea who he was, or what he wanted to do to her.

Everyone in her life had called her stupid, dumb, and a waste of space. Here she was, working full-time at the diner, and studying at a local college, struggling through. She looked close to tears, and it was like getting punched in the gut.

Rather than turn away from her curvaceous beauty, he took a step toward her, knowing there was no turning back, not now, not ever.

Macie had gotten under his skin. She was all he thought about, and considering he was eighteen years older than her, that said something. He’d never been without female company. Whenever he had the need to fuck, all he ever had to do was call a woman, and she was putty in his hands. It always helped that he was a generous lover.

He loved to fuck, and he did so dirty and hard. Ever since he met Macie three months ago, there hadn’t been any other woman in his life or in his bed. The only woman he wanted was Macie.

Sweet, sexy Macie, who would look so good spread out naked, taking his cock. He couldn’t decide which part of her he wanted first. Her pussy was high up on that list, but her mouth, the fullness of her lips wrapped around his length, was nearly impossible to deny himself. Then, of course, there was her tight asshole. He doubted any man had ever fucked her at all.

She was so unaware of her sexual allure.

He removed his jacket and took a seat beside her.

“Wilson,” she said, looking up and smiling.

“Hey, beautiful.” He glanced down at her books. “What have you got here?”

“Nothing. It’s all stupid.” She slammed the books closed, got to her feet, and rounded the counter. She tucked strands of her brown hair behind her ears. “It’s so good to see you. What would you like?” She handed him a menu, and he nodded toward the coffee pot.

He pretended to look down, but the moment her back was turned, he watched the sway of her full ass. He couldn’t wait to run his hands all over that rounded ass. So full and juicy. He’d gladly sink his teeth into the flesh.

His cock began to swell, and as she turned around, he returned his attention to the menu in his grip.

There was nothing else he wanted but Macie’s pussy, but instead, he ordered a burger and fries.

Again, until he stepped into this diner three months ago, he hadn’t had a burger since he was a kid. Steaks were more his thing, but he figured a few greasy burgers wouldn’t kill him, at least not yet.

Tapping his fingers on the counter, he watched as Macie wrote down his order. The chef, Carl, was a sweet guy, and from what he understood, the only person in her life to adapt so she could have a job. No one else would take the time with her.

She poured him some coffee. No cream. No sugar. Just the way he liked it.

“How have you been?” she asked.

“Busy. You know how it is. Life happens. Contracts and stuff.”

“I’m so pleased you don’t do that bodyguard work anymore. You must have been so scared doing some of your work.”

He used to work as a bodyguard up until a few years ago, when his investments paid off. He was a wealthy man and had his fingers in so many industries. Being at the frontline of protecting celebrities and businessmen, he’d learned a thing or two, and with that knowledge, he’d made a life for himself. He was wealthy, and the only thing he wanted stood right in front of him.

But he didn’t care.