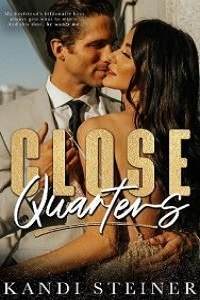 I knew now what it was.

That feeling I’d had that first day on the boat, when the sun was high and warm on my neck in Barcelona — the way my stomach had somersaulted like we were in a deep sea storm even though we were still tied up at the dock.

It was a warning.

I didn’t see it then, didn’t recognize it as anything more than nerves and maybe a little sorrow swimming in my gut.

But now, with the blood pooling around my head, soaking into the teak and my hair all the same, I understood.

It was a warning.

The universe knew long before I did the way this all would end, and it cautioned me the only way it knew how.

But I ignored it.

Now, as the blackness invaded my vision, the splitting ache at the crown of my head going numb, I caught one last glimpse of the man responsible for it all and I wondered how I never saw it coming.

How did I never see what he was capable of, when pushed, when threatened?

How did I ever let him hold me, kiss me, have me in every way there is to be had?

How did I fall for the lie those eyes told, for the heart within that chest, for a man so evil?

They say love is blind, and in most cases, I imagine that means you look past the faults of those you love — how they leave the cap off the toothpaste or throw their dirty clothes on the floor — or perhaps past your own inhibition telling you that maybe you could do better, that maybe you deserve more.

In this case, it meant death.

Through the fiery haze, the smoke and the flames, the broken crystal and the last fragments of my heart — I saw the smirk of victory on his face.

I tried to ask him why, but it came out as a cough instead, the blood around my mouth bubbling with the effort.

And then, everything went dark.

I was going to vomit.

The reality of that unfortunate truth settled in more and more as we walked the main deck, me following behind Joel, him excitedly pointing out places on the ginormous super yacht he was going to be working on for the next few months using terms I’d never heard before while I held onto my camera and looked for places to yack.

There was a head at the back of the boat, which I learned was yacht talk for the bathroom. That would work. There were a few large plants on either side of the bar we’d just walked through. The pots they sat in wouldn’t do too badly. There had to be a trashcan in there, too — perhaps behind the bar.

I supposed the easiest option would be to just lean as far overboard as I could and let the contents of my stomach feed the fish below. But I’d have to have control — if I got even one drop on this yacht, I’d die of mortification before the owner would likely kill me for real.

“Pretty sweet, right?” Joel asked me, spreading his hands out on the railing at the front of the boat — or rather, the bow, as he’d so cheerily corrected me. “It’s a bitch to clean it all, though,” he joked. “Especially when it’s time to scrub the teak. Not looking forward to that.”

I tried to smile through my nausea.

“Can you even imagine being rich enough to own one of these things?” He shook his head, turning to face me again with the same dazzling smile that had made me fall in love with him our freshman year of college.

It was hard to believe that was four years ago now.

“I’ve been waiting for an opportunity like this for years, Aspen… working my ass off as a deck hand, catering to horrific guests on charter after charter…” He shook his head. “And now, it’s finally all paying off.”

Joel’s smile doubled at that, and he swept me into his arms, though my hands didn’t wrap around him in return. They were too busy holding onto my camera where it hung from my damp neck, like I was afraid if I removed them I’d lose all composure and my lunch, too.