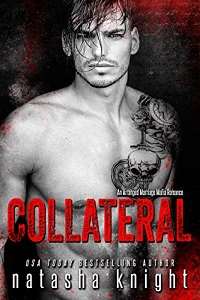 It’s almost one in the morning when we drive up to the house in the posh Todt Hill neighborhood of Staten Island. The tall iron gates stand open, which surprises me. Security isn’t something my father takes lightly.

As we slow to a stop, the guard greets the driver then shines his flashlight in through the open car window.

I turn away from the bright light when he flashes it in my face.

“You’re to take her directly to her room. She’s to stay there,” he tells the driver.

Translation: lock her in.

“What’s going on?” the driver asks.

I catch the guard’s eye. “He’s got company.”

The driver nods then pushes the button to close the window and we drive toward the house. It’s a beautiful mansion, one many people stop to look twice at, but I’ve always thought of it as more of a prison.

And tonight, I’m being brought back like an escaped convict.

Two SUVs I don’t recognize are parked alongside the circular drive. I can see from here there’s a driver sitting inside each one. Cigarette smoke wafts out of the open window of the first vehicle.

Neither my driver nor John, the man my father sent to retrieve me, answer. Instead, we pull to a stop and John climbs out, opens my door.

I step out, grab my duffel bag.

He takes it from me in one hand and closes the other around my upper arm.

He neither lets me go nor bothers to reply. Why should he? He doesn’t answer to me. He answers to my father and he knows what happened to the other soldier who tried to help me. I’m sure they all know.

Tonight, an example was made to show what happens when someone crosses Gabriel Marchese.

Guilt makes me nauseous. He made me watch. Part of my punishment. Only the beginning of it, I’m sure. I’ll take what I have coming but Alex didn’t deserve what they did to him. That’s on me.

We climb the stairs to the wide portico, John’s grip harder than it needs to be as I walk along, my steps slower than his. I’m in no hurry to get inside.

The men stationed at the door open it, only sparing me a quick glance because I don’t matter, even if I am the daughter of the boss. I’m just a pawn and everyone knows it.

Once inside, I glance down the hall toward my father’s study. Two men I don’t recognize stand just outside the door. They don’t work for him. I know it just from the way they’re dressed.

When we near the stairs, the study door opens and my father’s attorney, Mark Waverly, steps into the hallway. He takes a few steps toward us, studies me for a long moment before turning to John.

“I was told to take her upstairs.”

“Change of plans.” He gestures to the study with a quick sideways nod of his head.

My father doesn’t often call me into his study and certainly not when he’s doing business.

When I don’t move, John tugs at my arm.

“Then tell my father’s goon to get his hands off me.”

Waverly gestures to John to let me go.

I brush my hair back, steel my spine. I try to ignore the splatters of red on my white T-shirt. My father ordered the beating, after all. I’m sure his business associates will neither be surprised nor offended by the evidence of such violence.

But as I near the study, I feel my heartbeat pick up. I force a bored expression on my face. I’ve worked on it for years and still, I don’t know if they see right through it.

When I’m a few feet from the door, I take a deep breath in, hoping it will calm me. It doesn’t.

I take two steps into the dimly lit study and stop. John and Waverly enter behind me and close the door.

There’s an older man I don’t recognize sitting in one of the armchairs. He’s dressed in a three-piece suit and I wonder how he’s not burning up even with the air-conditioning. But maybe it’s anxiety that has me sweating.

My father is seated behind his huge desk leaning back in his chair. If he’s trying to look relaxed, it’s not working. I see how the corner of his left eye is twitching. It’s his tell. I wonder who else has picked that up.

I watch as he scans my face, takes in my shorter hair. I cut about six inches off since he last saw me. I hated to do it, but I didn’t want to risk being found.

And still, I was found.

But disappearing when you’re Gabriel Marchese’s daughter is not an easy thing.

On the upside, I do like my new bangs, although they’re a little too long and I keep having to tuck them behind my ear.