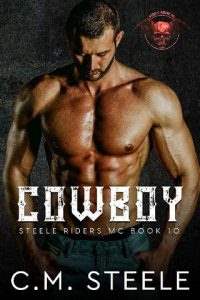 I don’t even set down my messenger bag on my desk when my boss shouts through his office door, “Angel, get in here now.” All eyes in the agency’s bullpen turn to me. I give a half-hearted smile with a shrug as my face floods with heated embarrassment. “Angel,” he barks out again. Can the asshole sniff me? I’m not due to start work for another thirty minutes, and I didn’t pass his office, so how did he know I was here?

This is my second week here, getting my hands on experience at Richter PI Agency. I hate this place, but it’s all a part of a bigger plan.

Not even bothering to take off my jacket, I walk over to my boss’s office and knock on the door while all eyes remain on my back.

“Well, get your ass in here. We don’t have all day.” I twist the knob and walk in, holding my head up high and not giving him what he wants most, my submission. His hatred for powerful women is obvious.

“Good morning, Mr. Richter.” I smile, attempting to put on a happy face like a good employee even though he has to be the worst boss I’ve ever worked for, making me want to call it quits on this assignment early, but my mama didn’t raise no quitter.

“Will she do?” he asks the man sitting on the edge of the desk with his large arms crossed and a scowl on his face, without bothering with any introductions or basic manners.

“Excuse me?” I stare at the man that I immediately recognize because he’s Daniel “The Beast” Miller, an MMA champion. Throughout my career, I’ve learned a lot of defensive tactical moves, but my favorite is to hit an MMA gym and work my body in new ways to take down a perp.

His eyes roam over me appraisingly. “She will work.” He’s gruff and assuming, but I’m not going to argue with him just yet. It’s not smart to piss off the clients, especially when I have no idea what this is regarding. I can’t blow my mission by getting annoyed and letting my mouth run.

Sensing the need to explain, my boss stands and addresses me. “I have an assignment specifically for you. Mr. Miller will explain what he needs you to do. All expenses will be paid.” He emphasizes that last bit as if somehow I understand how important that is. His voice is laced with innuendo that makes me wonder if the rumors are true about Richter.

“Okay…what is it?” I jut my brow up; a celebrity needing a PI means I’m going to have to be running on a different level of bullshit. Lies and manipulation while maintaining my secrecy. Fuck, it’s like the world is out to get my ass.

The fighter frowns. “I’d prefer to discuss the matter in private.” He stands, looking ever the vicious man he’s known to be in the cage, unnerving me and not in a sexual way. Miller has been rated one of the sexiest athletes, along with his twin brother. Still, I’m not concerned about his appeal. I need to see where this assignment is going. Despite how hot he is, thankfully, I’m not attracted to him.

“I don’t know what kind of services you’re looking for, but….” I cross my arms, becoming extremely defensive, accidentally lifting my breasts and drawing my boss’s attention straight to my tits. I quickly put my arms down at my side, attempting to avoid giving Richter something to gawk at.

Miller puts his big meaty hands up to tell me to chill. “Relax. It’s nothing sexual. I just don’t want my business plastered everywhere.” He looks around as if someone’s going to hear him say that even though we’re still in the boss’s office. Although, I’m sure that it’s filled with a listening device or two because the fucker is shady as hell.

That’s why it’s been so difficult to nail him. He’s just been on the right side of bad that he’s come out squeaky clean, avoiding all the damn traps that have been set for him.

“I have a room you can use,” my boss offers with a pep in his step. Standing up and walking around his desk, Richter tries to get in between us and lead Miller where he wants.

“Do you have a vehicle we can talk in?” the MMA superstar asks blatantly ignoring him, moving to my side, creating a barrier between the boss and me.

“Lead the way.” Miller stretches his arm out and gives a pressed lip smile and then nods to my boss who straightened his scowl into a smile the second Miller’s gaze landed on him.

I stand and head out without a word to my boss who’s looking annoyed, but he won’t turn down money and I’m betting a lot of it.