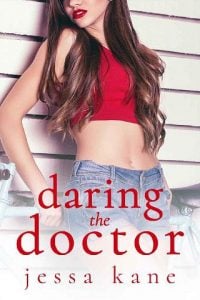 I stand in the shade cast by the stage, hands clasped behind my back, listening to the college president drone on and on about friendship and making one’s mark on the world. A recycled speech if I’ve ever heard one. Why did I agree to speak at this graduation ceremony?

Encouraging and inspiring young minds isn’t exactly my forte. Why the hell did they ask me to do this? I’m a surgeon, not a life coach. If it wasn’t for that headline-making emergency surgery I performed on the president, none of the students or faculty members of this college would know my name—and that’s how I would prefer it.

For the tenth time in as many minutes, my phone vibrates in my suit jacket pocket.

My jaw clenches at the thought of what I’m missing at the hospital, but I force myself to let the call go to voicemail. I’ve left a recording with several numbers for hospital staff to call in my absence. I’m not the only surgeon at Chicago General, for god sakes, but I’m the only one with the stones to perform an emergency bowel resection on the leader of the free world without hyperventilating, and apparently that has put me in higher demand than ever before.

Before I’ve even turned around, that feminine voice causes a finger of heat to drag down my spine. It’s low and conspiratorial and hushed, as if it belongs in a bedroom. In the dark. It’s a beautiful voice, really. It’s almost like one of those ASMR recordings the residents listen to when they want to destress. Close and husky. Soothing.

Something tells me to turn around with caution. Why?

Why do I have a feeling whoever has called my name will be…important?

Frowning, as is my default expression, I look back over my shoulder and the words being spoken on stage grow distant, muffled. My mouth loses any hint of moisture, my tongue growing heavy. The girl…she’s not merely beautiful. Standing there in her black graduation gown, she’s radiant. Her reddish-brown hair falls in long waves around her shoulders, huge green eyes shining up at me in what can only be described as unabashed hero worship.

I already know that’s the case without her saying another word.

Thousands of med school graduates apply to be in my program every year and I reject all but two dozen. This girl has obviously just completed her undergrad, because this is not a medical school. It’s a state university. Far in the future, however, she will almost certainly apply for her residency at Chicago General, one of the highest-ranked facilities in the country. And I find my stomach sinking with disappointment that I’ll have to wait six goddamn years to see her in my halls. God willing, she’ll still have that sparkle in her eyes.

Although, who says I have to wait to spend time with this girl?

If she’s a medical groupie as I suspect, I could take her home after my speech.

Hell, I could take her to the parking lot. Have her bite down on the graduation cap while I pound her from behind. My cock has already stirred in my briefs, filling with pressure. It’s been so long since I’ve wanted someone at all, let alone to this…magnitude. But suddenly, there’s an urgency to release the heavy burden between my thighs.

What is it about this girl?

“Yes?” I finally respond, facing her fully, hands still clasped behind my back.

Her full lips part on an intake of breath. She shifts right to left, visibly nervous. I’m used to having this effect on…well, everyone. At thirty-two, I’m a man given to irritation and that shows in the deep brackets around my mouth, the indents between my brows.

“I’m not supposed to be back here,” she whispers, doffing her cap and twisting it in anxious—graceful—hands. “But I couldn’t help sneaking just a minute of your time. I had to tell you the paper you published on machine perfusion was…incredible. Groundbreaking, really. I’ve read it six times. I think your method could save a lot of lives.”

“Thank you,” I say, surprised. Caught off guard for the first time in…perhaps the first time ever. “You’re not even a med student yet and you’re already reading surgical journals?”

“Mainly articles about transplants.” She averts her eyes momentarily and a hook tugs in my gut, telling me there is a story behind her interest in that particular kind of surgery. And I find…I would like to know that story.

Before I can ask her to explain, however, she continues. “It might be a while before I’m a med student, but…definitely someday.” Putting her cap back on, she starts to back away. “I won’t take up any more of your time. They’re going to call you on stage soon and I don’t want to miss the speech.”