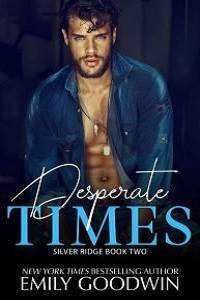 Or having a nightmare. Yeah, that’s more like it. Because there’s no way I’m running on only a few hours of sleep, need to be at work soon, and my ex-girlfriend is standing right in front of me with her hand on her stomach, saying we need to talk.

“Talk about what?” I ask, though I already know. But it can’t be. It’s not possible. Except it is.

“I’m pregnant,” she says, and the ground goes out beneath my feet.

I blink. Once. Twice. My heart hammers in my chest and I’m suddenly feeling like I’m going to throw up. “Is it mine?” I ask, words coming out on their own accord. I don’t want to be an asshole, but we weren’t exactly exclusive. The last time we had sex was nearly three months ago, and it was the first time in over half a year.

“The timeline matches up,” she says and makes a move to come inside. I’m in such shock I’ve just been standing here, rooted to the ground. I blink one more time, hoping the next time I open my eyes, I’m in bed…next to Chloe…where I’m meant to be. “We hooked up in July.”

“June,” I automatically correct and then shake my head. “Sorry.” I step aside and let Stacey in, closing the door behind her. An instant headache starts to come on, one I know won’t go away until all of this is over.

“Do you want coffee?” Stacey goes into the kitchen, opening the cabinet that holds my coffee mugs. It bothers me that she knows me, that she knows her way around the apartment, yet it makes sense she does. We on-and-off dated for years. “You look tired.”

“No.” My feet move, body going on autopilot, taking me to the island counter in the kitchen. My coffee pot is already full, thanks to the automatic timer. Normally, it’s a welcome smell in the morning, but right now it’s making my stomach churn. “I had the weekend off.”

“Long night then…what?” Stacey looks around, eyes wide. “Do you have someone over?” she whispers. “I’m so sorry if you do. I didn’t want to drop over unannounced, I just…I’ve been trying to call.”

Shit. She has. And I’ve been declining her calls.

Stacey smiles and takes two mugs from the cabinet. “Good.”

I rest my hands on the cool counter, needing proof this isn’t a nightmare. This is actually happening. “Should you be drinking caffeine?” I ask when she fills up the second mug with coffee.

“A little doesn’t hurt.” She hands me my mug. “And look at you, being all protective of the baby already.”

I set the coffee down, certain I’m going to throw up now. The baby.

I’m still not convinced, and if that makes me a jerk, then so be it. But it’s been three months…which I guess isn’t really that long. If she wasn’t expecting to be pregnant then maybe it took a while to realize her cycles were off or something.

“Where do you want to go from here? How can I help?” I ask as the room spins around me.

“I’m going through with the pregnancy, obviously, and I’d like you to be involved.” She comes around the counter and takes my hand, placing it on her stomach. “Just like before.” She pushes my hand down, moving it between her legs. I jerk my arm back.

“Stacey,” I start, closing my eyes. I bring one hand to my forehead again, pinching the bridge of my nose. “If the kid is mine, you know I’ll help however I can. I’ll be there. But us? I’m sorry…we’re over.”

I just nod, not sure what to say. We have history between us, but nothing was ever serious. There was never a point in our relationship where we talked about the future. The most we ever planned ahead was where we’d want to go on my next week off, and even then, a lot of our trips were spur of the moment and not very well planned. We casually dated on and off for years because it was easy, not because we couldn’t deny our feelings for each other.

Each hookup was met with a sense of familiarity, not comfort. And each breakup left me feeling some relief. There was no regret, no longing or heartbreak. Our relationship was one of convenience, and I was always upfront about it.

Stacey never came home with me for holidays.

I never met her family.

And now she’s pregnant with my child. Maybe. I’m still not convinced it’s mine.

“How have you been feeling?” I swallow hard. Pressing my fingers into my flesh before opening my eyes again.

“The morning sickness is ramping up,” she says with a grimace.