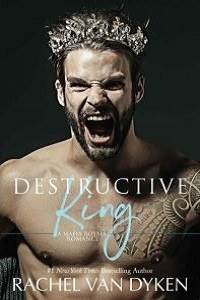 “Death is not the opposite of life, but a part of it.” —Haruki Murakami

I’d been living at the Abandonato compound, aka house, for two days, and already I felt like I was going to go crazy.

The only thing that helped was Ash’s mom Luc’s amazing cooking and the fact that Chase, underboss to the Abandonato Family and current US Senator from Illinois, reserved his terrifying mafia face for his children.

It was like he saw past the sweaters I couldn’t help but button all the way up to my chin.

He saw past the shyness.

He saw it all.

So when he looked at me, it was with respect.

If only that trickled down into his one and only son, Ash.

The same son who’d been spiraling since the death of his fiancée.

A chill wracked my body as I shot up from the bed in search of a sweatshirt I could put on. Why did they always keep the house so frigid? It was like they didn’t believe in heat or something, not that I wasn’t thankful for having a roof over my head after my adoptive parents’ death.

I blocked out the memories.

Just like I blocked out the blood that seemed to still be staining my hands even though I hadn’t done anything.

No, that had all been Ash.

I’d never seen another person so full of rage, so full of uncontrollable sadness that you couldn’t help but feel it every time you were in their presence.

Thunder boomed outside my window as the late fall rain pounded against the rooftop. I’d always loved storms, even more so now that I had a ginormous room with a balcony that overlooked the pool—including the pool house where Ash was currently brooding.

Memories of kissing him in that pool assaulted me until my feet took me over to the door, until I was opening it and peeking my head out to get a glance at the shallow end where he’d pushed me up against the wall and kissed the hell out of me.

To the footsteps I’d taken from the pool in a stupid immature move that probably could have ended with my blood on his fingertips—he’d been that angry.

I stared at his door and willed it to open.

And when it did, I nearly dropped to the ground so he couldn’t see me.

Instead, he just looked up at the sky, swaying on his feet as a bottle of pills fell from his hands onto the cement; he barked out a laugh and tilted back whatever was left of the fifth he’d chosen that night.

His full lips were pulled back into an amused smile as the rain attacked whatever shreds of good sense he still possessed.

“Are you happy now?” He roared up at the sky, then threw the bottle against the side of the pool house as the pills on the ground washed away. “Answer me!” He grabbed a chair and threw it into the pool. “Are you fucking happy?”

His screams were going to wake up the only neighbors we had—two miles away.

As it was, he was one more mistake from getting chained in the dungeon. I knew this because Chase had said so during dinner the night before, and when I laughed, and nobody else did, I realized they did, in fact, actually have a soundproof room in the basement.

Something told me people didn’t exactly come back from that.

It was his own child, but it was also the mafia, and even though nobody ever explained the rules—I knew one thing. They were killers. All of them. So chaining your son to a chair in the basement?

I hesitated for a minute, but when he grabbed another chair and threw it, I snatched my sweatshirt, told myself that I’d faced angry before and knew how to calm it, and ran down the stairs and out the kitchen door.

Rain pelted my gray hoody as I jogged over to Ash and yelled, “Stop!”

He was holding the chair midair as he turned to me, his icy blue eyes void of all emotion.

Lost. He was so lost my heart cracked bit by bit as his chest heaved with more rage than a human was capable of holding—capable of coming back from.

A tear slid down my cheek, mixing with the raindrops.

And yet, he focused on the one thing he had lost.

I didn’t want to judge his mourning, but that’s not what this was—this was devastation pure and simple. This was carnage in its rarest form—this was death while still living.

A damned purgatory I wasn’t sure anyone would come back from, especially since he chose to punish himself because he was left behind.

In Heaven with their unborn child.

“Go. Away,” he said through clenched teeth, but at least he lowered the chair to the ground.

I took a deep breath and then a step forward. “You’re drunk and, from the looks of the pills you spilled, high. Just sleep it off, Ash—”