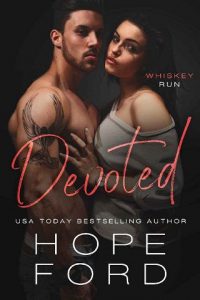 I can’t take my eyes off him.

I work around models every day. I have for the last five years, but I’ve never seen a man like him before. He’s manly, even with his arms loaded down with what looks like shopping bags. His arms are flexing, making the tattoos move as he readjusts the load he’s carrying. The closer he gets, the more I can’t look away. His hair is dark and a little long on top but short in the back. His chin and jawline are covered with a thin stubble of hair, and my fingers are itching to touch him.

He stops right in front of me, and I don’t know how long we stand here, staring at each other, but then Kameron, the production assistant, walks up to us, forcing the man’s eyes off me. “Are you the caterer?” he says, and even I can hear the surprise and judgmental tone in his voice.

The man smirks. “Uh, yeah, I guess I am.” He holds the bags up, and I notice they say Red’s Diner on them.

Kameron points to a table set up under a tent. “Can you put them over there, please?”

The man nods, and with a long glance at me, he turns and carries them over to the table. I follow him because there’s no way I can stop myself. He starts unloading the clear containers and arranging them on the table, but it’s obvious this isn’t something he does every day. “Here, let me help.”

I start arranging the trays and tubs of food. There’s fruit, veggies, what looks like chicken salad, crackers, and finally – finally – the stranger pulls out what I’m looking for.

The man is holding the Styrofoam container in his hand, and on the top is the name Lakelyn. I shouldn’t get this excited over food, especially cake that I shouldn’t be eating anyway, but I clap my hands together excitedly. “Violet didn’t forget.”

The man is staring at me, no smile on his face, but there’s definitely a flare of interest in his eyes. “Lakelyn,” he says, reading the top of the box. “Is this for you?”

The sound of my name on his lips sends goosebumps up my arms, so all I can do is nod.

“You know my sister?”

“Uh, yeah, I met Violet the other day, and she promised me she’d send me a slice of the Apple Cinnamon Blaze Cake.” I open the container and take a deep breath, inhaling the sweet scent. I moan. “I’m pretty sure she just became my new best friend.”

He chuckles, and I can feel my face turning red. I probably shouldn’t get this excited over food, especially in front of a stranger.

I close the lid on the box even though I want to dive into it now. “So are you going to tell me your name?”

“Tate. My name is Tate Jennings.”

He finishes moving things around on the table, and while he’s looking down, I’m looking at him. Delivering food is definitely not his day job. But before I can ask him how he got wrangled into bringing food, he holds wrapped plasticware up in front of my face.

He smirks. “Really? I thought you were excited to see me, but it was actually the cake you wanted. Go ahead, dig in.”

Sakes alive, I’m a mess. If I had to choose, I’d definitely choose him, but there’s no way I can say that. I know I look like a tomato right now. When I get embarrassed, it’s obvious, and well, I’m definitely embarrassed. I accept the plasticware and set down the carton with the cake long enough to rip open the plastic. I put a small piece of cake on the fork and lift it to my lips. When my eyes meet his again, he’s staring at my mouth. I’m standing here, probably drooling and about to shove cake in my mouth, and he’s watching me so close I want to drop the fork and taste him instead. I blink and take the bite.

The moan comes instantly, and there’s no holding it back. I savor the taste, and the whole time I’m looking into Tate’s eyes.

He smiles and damn, I thought he was good looking before, but him smiling is a force that hits you right in the poleax. He clears his throat and shifts his stance, still not taking his eyes off me. “It’s good, right?”

My coworkers are here, the few production staff, maybe ten total. And there’s quite a few people from town that are lined up to see the commercial being shot. But none of them matter. My eyes are on Tate.

He’s nodding, and I should probably leave it alone, but I’ve found in life that if you want something, you have to go for it. “But, well, you were right the first time though.”