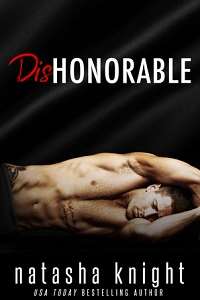 I shuddered at the sweep of cold air that rushed me when the basilica doors opened. They carried a warning. An omen.

My husband-to-be stood at the head of the aisle dressed in black from head to toe, opposite my bridal white.

He was striking, even if I hated him. His victorious eyes devoured me whole without ever leaving my own, trapping me, predator and prey. I wondered if his mouth was watering, saliva wet on his tongue, as he imagined my submission, my yielding to him.

I knew what was expected of me tonight. What he and my grandfather had worked into the contract that made me Raphael Amado’s property. We must consummate. My virgin blood must stain his sheets. My face burned with shame and fury, and each step reminded me that it was the devil I was about to marry. A monster, hiding beneath the most beautiful mask. And I knew as I walked toward my unchosen, unwanted destiny that I would never forgive my grandfather for his betrayal.

She stood like a vestal virgin at the doors, her golden gaze arctic as it swept down the aisle to collide with mine. She masked her thoughts well, but when she lay beneath me tonight, I would own her. I would know her pleasure. Her pain. I would possess every inch of her.

She belonged to me already, even if she couldn’t stomach the idea. I wondered if I’d have to make her tonight. If I’d have to pry her legs apart and hold her down to soak my cock in her virgin’s blood. I needed to get that thought out of my head, though. It wouldn’t be right to stand before God and man with a fucking hard-on.

I watched her as she commenced to walk down the aisle: stunning, striking—and on my twin brother’s arm. She’d refused her grandfather. Beautiful, that. He deserved only her hate.

Her thick chestnut hair with its intricate braids had been arranged on top of her head. Even with the lace draping her pale face, I could see her eyes, set and accusing, burning into me, at odds with her soft, full lips and innocent, almost cherublike features.

When she reached me, my brother lifted the veil from her face. The look they exchanged grated on my nerves. They’d become fast friends.

Before handing her over to me, he pierced me with a look of clear disapproval. As if what I was doing was just for me. As if it weren’t for him too. As if I didn’t deserve everything I took, after what I’d been put through. His look accused me of stealing this virgin bride as if I were some sort of monster.

Well, he hadn’t walked the last few years in my shoes, so he could go fuck himself.

I shifted my gaze from my brother to Sofia, let it sweep down over her, seeing her in the dress I’d chosen. She only narrowed her shadowed eyes at me for that, but she didn’t fight, not when I covered her hand with mine, not when I drew her down to kneel before God. And when time came to promise to love, cherish, and obey—yes, I made sure to include the vow of obedience—Sofia spoke the words that would seal her fate and mine.

That was all it took, and she was mine.

And when we stood and faced each other as husband and wife, I wrapped my hand around the back of her neck and drew her to me, claiming her mouth with my own, announcing to anyone who had any doubt at all, that I owned this woman.

That she was mine.

And what was mine, no man had better put asunder.

Because I’d fucking kill any bastard who tried.

The Christmas holiday was my favorite time of year, and this year, because the twenty-fifth fell on a Saturday, St. Sebastian’s Preparatory School gave us a full additional week off. This was my last year at the private school. As grueling as the work was and as uptight as the nuns could be, I kind of liked it. The old mansion that housed the girls was beautiful. The boys lived across the vast property in a second, more modern mansion. I loved the grounds, the thick woods that surrounded the remote school, and even the small room I shared with another student.

My grandfather’s mansion, although beautiful, was very different from the school. Driving along the familiar curve of the winding driveway and seeing the large, white stone house come into view was always a bittersweet moment for me. It made me miss my parents, especially my mom. That never seemed to change.

Then I saw my sister, Lina’s, face peering out the window. I wished Lina attended the same school as me. She had a gift for piano that I did not, though, so she went to a special music academy near home. She complained her poor fingers were worn-out, but I knew she loved playing.