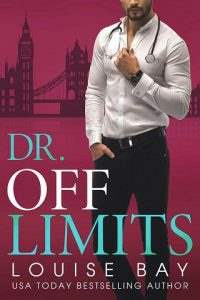 Dr. Off Limits? I have a fever and I think you might be the medicine I need.
I’ve sworn off men to focus on my dream job that starts on Monday. But my best friend talks me into a final night of fun—a blind date.
I only agree because the guy is going to work as a doctor in Africa.
It’s the best date of my life. Dr. Africa makes me laugh and swoon and I want to give him a thorough physical examination.
He turns into Dr. One Night Stand, and I’m not sad about it.
Monday morning, I’m enthusiastic and excited, until I bump into . . . you guessed it.
Apparently Dr. Africa got his brother to fill in on our date, and now I work at the same hospital as the guy I got naked with on Saturday.
Did I mention he’s my new boss?
I need to go right to the Emergency Room and find a cure for my crush on Dr. Off Limits.

In just five days’ time, I’d be working at one of the most prestigious hospitals in London, answering to the name I’d worked hard to make mine: Doctor Scott. The thought was very likely to hospitalize me with a panic attack between now and then.

“How are the odds looking?” Parker asked me.

“Not good.” I winced at the tightness of the strap around my chin. I fiddled with the fastenings of my helmet and instantly the harness that I’d just been strapped into started to bite into my thighs. Normally being in the outdoors, in the midst of trees the height of skyscrapers, breathing in air as fresh as it got in London would be a welcome change from studying at my desk. Not today. As I took in the crisscross of wires between the trees and the so-called bridges between them that I was expected to walk along, I decided this kind of change, I could live without. “The likelihood of me having a panic attack just went to ninety-two percent.”

“But we got down to forty yesterday,” Parker said, her tone a teenager who’d been told her curfew was 9pm.

“Yesterday involved an open-top bus, an uber-enthusiastic tour guide with a passion for the fire of London, and mimosas. Today is different territory. In every sense.”

My best friend was well aware of my anxiety when it came to starting at the hospital. She’d witnessed the years I’d spent studying. The long days that ran into longer nights. The nonexistent social life, sacrificed to the study gods. The way I used to send up a tiny prayer that my clients would cancel their haircuts so I could cram in an extra forty-five minutes of study. Over the years, enough of my prayers were answered that I passed each stage of my journey on the way to being a doctor. My new job had been a long time coming, the culmination of every second of hard work I’d put in over the last seven years.

“I thought a ropes course would be the height of distracting,” Parker argued. “Pun intended.”

“Not from my imminent death, it’s not.”

“I suppose I didn’t think about that. You want me to go first?”

I shook my head. I always found it was better not to know how difficult things were about to get or you risked chickening out before even trying. If I’d known what I was going to face studying to become a doctor back when I was cutting hair and discussing people’s holidays six days a week, I would have never filled out that first application form. For many of the years since, it had been beyond hard, but if I’d known how hard it was about to get, there were a thousand times I would have given up. Naivety and blind ambition were a powerful combination.

One of the instructors clipped my harness onto the twisted metal rope and ushered me forward. “Keep moving. There are arrows showing you the direction you’re heading and instructors placed regularly along the route.”

“You all dressed in black in case we fall from fifty meters, die, and you don’t want to look like you’re ready to break out the party tunes?” I asked.

He squinted. “Wow, quite the optimist, aren’t you?”

“We dress in black so we don’t distract anyone with bright colors.”

“Sure,” I said noncommittally.

“And no one has died on this ropes course,” he added.

The elephant on my chest decided to stand and take a stroll. “No deaths” might seem like a low bar for a safety record, but I’d take what I could get.

“Not today anyway.” He gave me a little shove off the platform where we were standing, onto the first “bridge” to the next tree. The so-called bridge was a series of wooden slats spaced about fifty centimeters apart and connected by chains that tinkled in the wind. A more fanciful person might say it sounded like we were in the home of the fairies. I knew it was probably a fake soundtrack played to drown out the sound of screams.