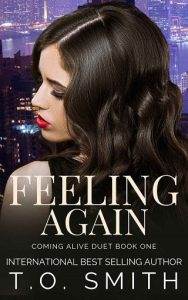 Falling for your brother's best friend isn't as fun as it's cut out to be, especially when you're so screwed up that you're terrified of commitment and being locked down.

I crave freedom. I need to let go of the insanity I feel swirling in my head.

But I do something even crazier than getting high or fighting like I always do.

I'm toxic. I ruin everyone and everything I touch.

And yet . . . all while still needing Blaze, I crave Jonah.

And allowing both of these men to love me is either going to be what saves me . . .

Or what sends me toppling into the deep end.

**This is book one in the Coming Alive Duet. It does end on a cliffhanger. It is an MFM menage.*

Trigger warnings: cliffhanger, pregnancy, drug abuse, two men sharing one woman.
Please also note that this book deals with a woman who struggles with the fact that she is pregnant, and she detests every moment of it. If this is a trigger for you, do not read.

I dragged my feet along the sidewalk with a heavy sigh, glaring up at the darkening clouds above me. Mom was at home, and when she was home, I wanted to be anywhere fucking else. Add the mood I was currently in to the mix, and it was just probably best that I wasn’t around anyone. It was best for everyone if the world just pissed off and left me the fuck alone.

I looked to the right, a familiar street staring back at me. I hadn’t even realized how far I had walked. I fought on this side of town—illegally, but I fought, nonetheless. Fighting—and winning—fed my addiction.

I just didn’t give a fuck.

And why should I care? No one else gave a fuck, and that high I achieved was the only thing in this fucking world that never let me down.

The hair on the back of my neck lifted, and I jerked to a stop, spinning around. Standing in front of me was quite possibly the finest man I’d ever seen in my life. Straight, blond hair fell into ice-blue eyes, almost covering them but not quite. He was tall—somewhere over six feet—and good God, he was built in the sexiest, smoothest way possible. There was clear definition to his body without it being overwhelming like so many other men I’d come across.

Fuck, he was practically my dream man walking. If I was a normal girl, he’d probably be my fucking prince charming.

But I wasn’t anything close to Cinderella—probably something closer to one of the evil stepsisters—so Prince Charming was going to have to wait for another day.

He arched a perfect brow at me and took a couple of steps closer to me. I took a cautious step back, but he reached forward and grabbed my arm, halting me. Tingles shot up and down my arm like I was stuck in some bullshit ass fairytale. His touch seemed to set my soul on fire, and the way he looked at me—it was like he knew every deep, dark secret I held locked up tight inside of me.

“What the fuck do you want?” I snapped. I tried yanking my arm out of his grip, but he had a firm hold of me.

I needed him to let me go. The way my body was reacting to him—I couldn’t deal with it. This kind of shit was only supposed to happen in silly ass romance novels. And my ass was far from being in one of those.

I wasn’t a rainbows and sunshine kind of girl, and I hated that my heart was pitter-pattering like I was.

“Your brother has been looking for you.”

I frowned. John was eight years older than me, but we looked like twins. The only good thing Mom had ever done was give me an older brother, especially one like John. But lately, we’d been distant. I hadn’t heard from him in months—almost an entire year.

He had trained me to fight from a young age, got me in the ring for the first time when I was thirteen, and I got my first win because of him right before my fourteenth birthday.

I rolled my eyes and managed to finally snatch my arm out of his grip. I didn’t know what game this fucker was trying to play at, but I wasn’t the one. I’d put him on his ass and knock his ass out cold before he could try to do whatever bullshit he had planned.

A car screeched to a stop. I swung my head around to see who the hell it was. A girl like me didn’t fight in the rings and do the dumb shit I did and not make enemies.