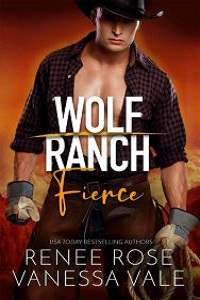 A human in the bunkhouse.

God, this was going to suck.

I’d had my fill of living with humans as a teenager. Being forced to suppress my wolf urges. Hiding my true nature when all I’d wanted to do was run wild and howl at the fucking full moon. Especially with raging teenage hormones. It had practically destroyed me, and the day I turned eighteen, I’d left my human family. Never wanted to live under the same roof as a human again.

I took off my hat, rubbed the sweat away with the bandana that had been tucked in my pocket. Clint, Johnny and I had been herding cattle and were finally done for the day.

“It makes no sense.” My fellow ranch hand Johnny hopped down from his horse, dust kicking up around his boots, to close the fence behind us. I leaned against my pommel and waited. “Why have a guy stay here two weeks just to breed a mare?”

And why did he have to stay with us in the bunkhouse? I wanted to ask, but I kept my mouth shut. Everyone already knew how I felt about living under the same roof as a human. About my past trauma.

“It takes, what? A few minutes to pasture mate once they get down to business?” Johnny continued. “It’s not like the guy’s trying to get some woman pregnant. It’s a dang mare.”

“I know,” Clint let his exasperation show in those two words. “Apparently, pasture mating’s too rough for this guy’s prized mare. He wants hand mating, and not by us—by his own vet. He’s like a… chaperone for a horse.”

“I just don’t get it.” Johnny said. The nuances of horse breeding weren’t his thing.

They weren’t mine either, really, but if some rich yahoo wanted to have his personal veterinarian babysit a mare he brought to Wolf Ranch to be bred, what did I care? I just didn’t like the part where the vet had to stay in the bunkhouse with me and Johnny.

Clint didn’t disagree with Johnny. He’d always had a calmness about him, but the fact that he smiled all the time was new. He’d met his mate back in the fall, and they’d had a baby only a few months ago. To say he was happy was an understatement. He was in fucking wolf heaven. A marked mate. A pup.

“It takes more than once to get the job done,” Clint reminded us.

“It took you only once,” Johnny countered with a sly grin and a wink.

Clint and his human mate Becky had gotten pregnant their first go—a one night stand kind of thing. When he finally figured out she was his mate, he’d moved out of the bunkhouse and now lived in a cabin up in the hills with his new family.

“There are a lot of high maintenance horse people in this country,” Clint said. “This guy is one of them. If he wants to have a vet remain to supervise his horse breeding and is willing to pay top price for it, he can waste his money all he wants. We can stand having a human around for a couple weeks. It’s worth the money he’s paying, believe me.”

Johnny frowned although he had no comeback for that.

“Besides,” Clint continued. “If his mare can be bred every other day, not just once, the chances of the horse and the vet leaving Wolf Ranch after the two weeks are even better.” Clint tipped his hat back. “After that, you’ll only have to share the bunk house with this grumpy fuck once again.” He thumbed his shoulder in my direction. “Until he’s voted in as sheriff in the fall, then he’ll be living in my parents’ place in town full time.”

I climbed down from my horse and led him over to the rail to loosen the bridle. I wanted the sheriff job. It might not lead to justice for my parents, who were killed over fifteen years ago, but I’d get it for others and protect the secret that shifters resided in this county. I’d crashed at Janet and Tom’s place a few times when the weather was too bad to drive the canyon road, but living in town? I wasn’t so sure about that. The election was months off, so I wasn’t going to borrow trouble with arguing about where I was going to sleep.

We stopped our work and looked up. He and his mate Audrey were walking our way from the main house. His pace was slow to match his mate’s, who held little Lizzie in her arms. When Audrey wasn’t working at the hospital, the three of them weren’t far apart. “Fancy truck with a fancier trailer.”

I nodded once because it was as I expected. Rich, eccentric horse owner, fancy horse fixins, including a twenty-four/seven vet.