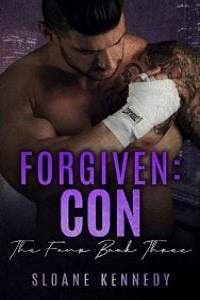 The kid knew how to throw a punch, I had to give him that.

Fifteen seconds ago, I’d been taking in the young man’s frail frame as he’d comforted the two children huddled beneath the umbrella with him all the while thinking to myself that a stiff wind could blow the guy over.

My stinging jaw was proof that he was stronger than I’d given him credit for.

“I do,” he snapped as he shook out his hand. I had a sneaking suspicion he’d ended up causing more damage to his own hand than he had my face, but I didn’t remark on that fact. I glanced down at his knuckles.

Yep, already turning red. They’d be black and blue by day’s end while I’d probably have to look hard in the mirror to see the mark he’d left on my face.

I waited for another punch, but none came.

Very much unlike his brother…

The same brother who lay buried six feet under not more than a dozen feet behind the kid.

“I’m sorry, I just came to pay my respects—”

“Go to hell,” the kid said in response, his green eyes like ice.

I needed to stop thinking of him as a kid because even though that was what he’d been the last time I’d seen him, there was nothing kid-like about him. I couldn’t help but let my gaze roam over him as I tried to find any evidence of the little boy I’d seen a fleeting glimpse of as I’d turned my back on his brother’s still body so long ago.

The kid’s—young man’s—dirty-blond hair was pushed halfheartedly off his forehead like he’d been repeatedly running his fingers through the soft-looking locks. His face was made of sharp lines and angles that made his unusual beauty seem just a little bit too harsh. Despite the fact that he was almost my height, I had to outweigh him by at least fifty pounds. I figured part of that was just his natural lean frame, but between his pale skin and the sharpness of his collarbone sticking up from the neckline of his shirt, my gut was telling me that he’d been missing out on a lot of regular meals for a while. In addition to hanging off his body, his clothes showed considerable wear and tear and weren’t a match for the elements. Thankfully, with it being late summer in New Jersey, he didn’t have to worry about the cold, but the storm clouds rumbling above our heads meant his thin dress shirt and khaki slacks would be soaked through in a matter of seconds when the heavens finally did give in and let loose.

“Uncle Micah?” I heard one of the kids with him—the little girl—call in confusion and fear.

“It’s okay, Rory,” the guy, Micah, called without looking over his shoulder. “It’s over.”

“Did he come to say goodbye to Papa?”

Papa? What the hell?

“She’s Brady’s kid?” I blurted before I could consider my words. “So Brady wasn’t—”

Before I could finish my sentence, Micah grabbed my wrist and dug his fingers into my skin. It didn’t hurt overly much but the move caught me off guard just the same and I snapped my mouth shut.

Something about the way he was holding on to me was almost desperate. I couldn’t think of any other word to describe it, even though it made no sense. There was not even a scintilla of doubt in my mind that Micah hated me with every fiber of his being, and rightfully so. I’d destroyed his brother’s life. If anyone had done to my brothers what I’d done to Brady Fox…

“Please, just go,” Micah added as he glanced over his shoulder at the children.

My eyes followed his to where the kids were standing huddled under the umbrella, the freshly turned earth behind them a brutal reminder of where we were.

And why we were there.

The girl couldn’t have been more than five and she looked nothing like the man I remembered. Micah, at least, had the same coloring as his late brother but the child—Rory—had dark hair and eyes and her skin tone hinted at biracial heritage.

The boy next to her was a different story. He looked very much like Micah. It was hard to guess his age, though. He was tall but still looked in early adolescence so he could have been anywhere from twelve to fifteen. Since that made him too old to be Micah’s kid, that left Brady as the most likely sire. The boy had his eyes practically glued to the ground. When he did briefly look my way, he let out a little whimper and dropped them again. The knowledge that I was scaring the hell out of him caused my stomach to roil.

Like Micah, both kids seemed to be on the thin side. Their clothes were clean and didn’t show the same wear as Micah’s, but while the boy looked like he was ten seconds away from outgrowing his clothes, Rory’s dress appeared to be a size too big. Something about the kids’ outfits niggled at my brain, though I couldn’t say why.