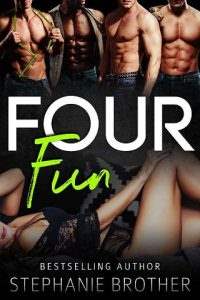 There are four of them, laboring away under the bright sunlight, framing the walls of Rusty’s expansion. Yesterday, when I came to work, there was only a concrete slab; today, there are hot, sweaty men, wiping their brows with gloved hands as they erect the wooden structure.

If summer weren’t a few short weeks away, and if I weren’t already daydreaming about all of the hot guys who will soon be vacationing here on Four Points Island, then maybe I wouldn’t be in the frame of mind to whistle at the construction workers in Rusty’s parking lot….

Nah. I’d do it just about anytime.

Women have been objectified for years, and it’s only fair that I return the favor whenever I have the chance. Plus, did I mention — hot construction workers.

The men look very busy, so when I put my fingers in my mouth and make a loud whistle, I certainly don’t expect one of them to stop what he’s doing and walk over to me. I figure they’ll ignore me, or at most scowl, or maybe grin, but the guy closest to me, who has the body of an action hero, immediately lays down his hammer and strides over.

“What was that?” he asks, as though I said something he didn’t quite catch.

I’m in the rare position of being at a loss for words, and I don’t know if it’s because he’s calling me out, or because his face looks like it was carved from a slab of granite and his deep-set eyes are removing items of my clothing with each step that brings him closer.

“Hi,” I say, letting my gaze roam over his hard body, from the gray t-shirt that stretches across his broad shoulders, down past his tool belt to the faded jeans that cling to his powerful thighs. When I die, I want to be reincarnated as those jeans.

“Did you whistle for me?” There’s a hint of a smirk on his lips as he removes his hat and wipes at the sweat on his forehead in a move that seems designed to accentuate the bulge of his biceps. His brown hair is buzzed close to his head. I don’t usually go for that look but it suits him. There’s also a shadow of brown stubble on his jaw and chin, and all of it works very, very well.

I release my lip when I realize I’ve been biting it. “Actually, I whistled at you.”

His smirk expands to a cocky grin. “Is that right?”

I nod. This conversation isn’t going anywhere fast, but that’s perfectly fine with me. I could stand here and look at this man all day. Well, I could if I didn’t have to start my shift in five minutes.

“Surely a man like you doesn’t need to fish for compliments.”

“Becca.” I tilt my head and gather my long brown hair on one side of my neck, never taking my eyes off of him. “What’s yours?”

“Nice to meet you, Shane. And what about your coworkers?” I ask, glancing past him. Though there’s plenty to admire about Shane, I can’t help but notice a man with the prettiest eyes I’ve ever seen working behind him. There are two other guys facing away from me, and their backsides are also quite enticing. “Are you going to introduce me to them?”

“No.” His lips press together as he gives a brief shake of his head.

“Why not?” I ask, lowering my voice to a conspiratorial tone. “Are they all assholes?”

“No,” he repeats. “They’re great guys, but I’m the only one you need to know. You work here?” He glances toward the building and then down at my chest, where the Rusty’s logo is embroidered on my shirt.

I nod, twisting my hair around a finger.

“What time do you get off?”

If he keeps looking at me like that, I’m going to get off right here in the parking lot. “Midnight,” I say, wishing I could be irresponsible and ditch work tonight.

“I’ll meet you here then,” he says. His eyes scan the length of my body one more time, lingering on my lips and my eyes, before he pivots and returns to his work.

After a perfectly normal night at work that feels like the longest waitressing shift anyone has ever worked in the history of time, I finally clock out.

Christine, the bartender, loaned me a non-Rusty’s-branded shirt she had in her locker, so I go into the restroom to change, brush my hair, and touch up my makeup. I leave the bar through the side entrance, and find Shane waiting for me there, casually leaning against a parked motorcycle.

His level of sexy had already been off the charts; the sleek, black bike takes it up another few notches. He’s freshly groomed, and now wearing a darker shade of jeans and a black t-shirt that fits like a second skin.