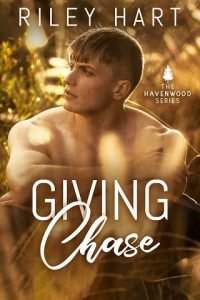 “Thanks for coming over to stay with him, man.” My brother gave Chase this dude-bro fist bump that made me roll my eyes.

“No biggie. I’ll watch some movies with the twerp or something,” Chase replied, and obviously that was a bit of a ding to the ego. It sucked being secretly in love with your older brother’s best friend…especially when he was very straight and thought of you as a twerpy little bro. Go me.

“I hope you realize how annoying it is that you talk about me like I’m not standing right here. Also, I graduated high school last weekend. I’m old enough to spend a weekend by myself. Hell, I could live by myself if I wanted to.” If I had money, or a job, but that was beside the point. What mattered was I didn’t need Chase Hawthorne babysitting me like I was a kid.

“He sounds mad to me. Poor Kellan,” Chase added.

I hated them. I hated them both. And by hate I meant love—Griff in the brotherly way, and Chase in the marry me one. He was so sexy. I loved his blond hair and how he kept it cut short. His brown eyes that were full of kindness, and those thick lashes and how they fell across his cheeks when he closed his eyes. And he was a nice guy, at least when he wasn’t teasing me with my brother.

“I despise both of you.” I crossed my arms, pouting. Yep, I was pouting, and I didn’t give a shit.

“Nah, you love us. Don’t smile, or you’ll ruin it. If you smile, Twerp, we’ll be able to tell you don’t really hate us,” Chase joked, so I flipped him off, stormed to my bedroom, and slammed the door. I could hear them laughing through the walls.

I plucked my headphones from the nightstand, slipped them on, and found one of my sad, sappy playlists. I quietly seethed over the fact that my brother had made Chase stay the weekend with me, while at the same time, I was glad I got to spend time with Chase. I was a bit of a mess; maybe always had been.

Griffin was overprotective. He’d been like that constantly, threatening bullies who gave me shit, taking the blame when I broke Mom’s favorite vase while trying to dance, when I so wasn’t a dancer. That was just how Griffin was. It was sewn into his DNA.

Then, when I was fourteen and Griffin nineteen, our parents died in a mugging gone bad—something that never happened in Havenwood—and it made things a million times worse. Griffin thought I was going to be hurt or attacked everywhere I went, or obviously at home too, if he or Chase weren’t there to protect me.

Yet not a day went by that I didn’t realize how lucky I was. Griffin had dropped everything for me. He’d quit college and come back home to Havenwood to raise a fourteen-year-old kid. He’d never once complained. Logically, I knew there wasn’t anything Griffin wouldn’t do for me, but fuck, he was stifling sometimes. He never let me fight my own battles. He protected me even when I didn’t need it. He kept me on a leash like I was a damn dog, afraid I’d die like our parents had, or, I don’t know, a fucking meteor would fall from the sky and crush me.

I couldn’t imagine what would happen when I told him I was gay. If someone looked at me wrong, Griffin would be all up in their shit. Chase too, but I didn’t mind that as much because it was sexy thinking of him defending my honor.

It was Chase Hawthorne who helped me realize I was gay. All it took was a shirtless hug from him when he was wearing a pair of swimming trunks. My dick took notice, and a whole lot of shit suddenly made sense.

Chase and my brother had been best friends for what felt like forever, even though Chase was a year younger. Chase had practically lived at our house when we were kids. Anytime his dad got drunk—and his dad got drunk a whole hell of a lot—Chase would show up at our place. Our parents had accepted Chase like he was their own, and when they died, he’d been Griffin’s second line of defense in taking care of me. Sometimes I wondered if something could be going on between them, but that made me want to curl in a ball and cry, so I pretended I never had those thoughts.

I was so stuck in little-brother zone, it wasn’t even funny. Even if Chase did like men, he would never like me.

So I pouted for an hour or so before my bedroom door was pushed open. Tugging off my headphones, I scowled at Chase. “You could at least knock. What if I was jacking it?”