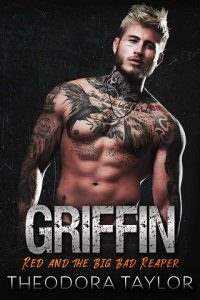 “Alright, I’m bored,” I tell the group of Reapers sitting around the roadhouse’s banquet table. I’m not the president of our biker gang, but I do expect plenty of answers when I demand to know, “How’re we going to fix this shitty vibe?”

Waylon, who actually is one of the Reaper's presidents, rolls his eyes and ignores me. Like I’m some mouthy brat—not the guy paying him six figures a year to run security at all my shows.

With the mood I’m in, that’d normally be enough for me to put a fist through his mouth. Nothing cures a bad case of the Bored as Hells like knocking out teeth. But I let it slide.

Waylon and Hades, the other Reaper prez, are two of the only guys I could call true friends prior to my music fame. Waylon’s the one who pinned me with my road name, Rockstar, years before I signed my record deal. And, trust, it’s a whole lot better to have him as a best friend you tolerate than an enemy you punched because he pissed you off.

I don’t want to use the word psycho, but Waylon has a reputation for ending anybody who crosses him. There’s a reason DON’T PISS OFF WAYLON is written in huge block letters on the list of rules hanging above the roadhouse owner’s office door.

It’s probably a sign of our enduring friendship that he just ignores me instead of pulling a gun and shooting me in the face. That could 100% happen with our co-prez. We call him Viking sometimes because he’s been known to go totally berserk when crossed.

Besides, I am acting kind of bratty. Borderline '80s-era Mötley Crüe. That happens when I get bored—which Waylon’s probably thinking I shouldn’t be, considering we’re at the Reaper's favorite Tennessee roadhouse with friends who know how to party, top-shelf blow, quality weed, and biker groupies willing to do just about anything to get invited to our table.

One of my hit tracks is playing overhead, and two topless blondes with big smiles and even bigger breasts appear to replace all our empty bottles and whiskey glasses with fresh pours of bourbon and Yazoo beers.

Yeah, this scene is as close to biker Valhalla as you’re gonna get.

“You want a mug for your Yazoo, Griff?” one of the waitresses asks. She presses her fake breasts into my shoulder as she sets a bottle of local craft beer down in front of me. It’s so cold, it’s got a wisp of smoke wafting up from its mouth.

Hmm . . . there’s a good chance I've fucked this girl on a previous occasion. But I can’t remember.

A few of the Reapers eye me expectantly—probably because the last time a waitress batted her eyes at me this hard, I convinced her to crawl under the table and give us all blow jobs. Now that was real '80s-era Mötley Crüe.

But tonight, my dick does nothing in response to her rubbing up against me like a cat in heat.

I take a swig of my fresh Yazoo to end any further conversation, then announce to rest of the Reapers, “Still bored.”

“I got Molly,” Rowdy yells over my song. He’s one of the Reapers who’ve been on tour with me all year. I’ve been letting him stay at my place in Nashville during the holiday lead-up to my record label’s big New Year’s Eve show, along with Crash, another Reaper on my security team.

Unlike Waylon, these guys know how to entourage. They start making suggestions as soon as they see the under-the-table blow job thing isn’t going to happen.

“We could throw down with The Bandits,” Crash says. “They’ve been looking over here funny all night. And Waylon hasn’t shot nobody in a while.”

Waylon tilts his head with a thoughtful frown, like the opportunity to dead somebody might just get him out of his seat.

But Hyena, who came up as a prospect with me over a decade ago, points out, “The last time we tried to beat down another gang for staring, we got over there, and all they wanted was Rockstar’s autograph. It was stupid as shit.”

I turn to glare over my shoulder at The Bandits anyway. A weird, ugly energy’s been brewing inside of me since I turned thirty a few weeks ago. I could use a good fight to blow off some steam.

But I guess The Bandits want to prove Hyena’s point. As soon as I make eye contact, most of the heavily bearded MCs sitting at the table behind us start pointing up at the song playing overhead.

The few guys not pointing tear off pieces from one of the shitty brown napkin rolls placed at each banquet table and pantomime the international symbol for Can I have your autograph?

Meanwhile, The Bandits’s prez shouts across the distance, “I requested them to play this one soon as I saw you in here. You’re my favorite rapper of all time.”