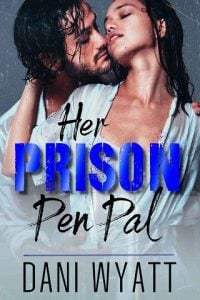 One year and 75 letters from you later, I don’t know if there is such a thing as a pen pal anniversary, but I’m making one because your letters are something to celebrate. Fate brought you to me and I hope soon fate will allow us to meet so I can thank you in person for giving me something to look forward to every day. From your first letter thanking me for helping your brother, I knew you were the one sent to help me.

Say hi to James for me. I miss the hell out of him but I’m happy he’s not in this shithole any longer. Unlike me, he didn’t deserve to be here. I hope he can erase the pain of this place and find the life he deserves. I hope he knows that friends aren’t always what they seem. There are few that won’t throw you under the bus to save their own ass.

I read your last letter about saving Bear, the starving pit bull tied up in the crumbling garage. I wanted to break through the concrete and metal bars and kill the motherfuckers that treated him that way. I wanted to crush their skulls with my bare hands for scaring and threatening you. Assholes that don’t take care of their pets, then have someone coming around in the freezing fucking cold at their own expense and risk to do what they won’t, then they aim a gun at you? There are so few humans left I don’t want to kill.

The only thing that settles me is that you have Mac and Tiny now. They’ve been with you almost eight months I think from what you said. It’s good they’re there to protect you and set any fuckers straight on what’s what.

I’m on countdown for my parole hearing in two days. Pretty sure I’ll be denied…again. But, who knows, miracles can happen. You happened. A miracle I never expected.

Gotta wrap up. Need to get this to the box before the bulls lock us back in our cages and I gotta turn in my damn pen. You’re the one thing in the world that makes me feel human, not like the animals they tell us we are.

A bittersweet smile tugs at my lips as tears burn my lower lids. I hold the paper to my nose and inhale, then tuck it back into the official Cleary State Prison envelope and check my rear-view mirror.

A beat-up Ford pickup pulls up behind me—the faded blue bed, mismatched with the even more faded red cab. Another car follows close behind. They flash their lights and I wave through the back window of my high school graduation gift from my parents: a classic if not somewhat battered El Camino.

I shift into drive thinking how quickly two years has gone by, how much I’ve changed doing this work.

I signal left and head toward our first destination down the block.

Buckled in next to me is a five-gallon bucket of cooked rice, veggie, and boiled chicken I made last night. The smell is so comforting. But it only partially masks the stench of smoke as we pass the still-smoldering bones of a burned-out house.

I make up my special doggie stew a couple times a week, then distribute it to the poor chained-up dogs of this city, whose shit-fucks of owners think throwing an animal outside on a fifty-pound five-foot chain constitutes proper care.

I know I will never be able to change the way some people view animals as property. But someday, I’m going to change the laws. I don’t know how, but I’ll never stop fighting for them until there are no more chains. I won’t quit until the laws hold people responsible for all this misery and cruelty.

My entire life, anything that’s felt authentic to me revolved around doing everything in my power to help the helpless, especially animals and more specifically, dogs. If I do nothing else in the time I’m given but ease some of their suffering in a significant and perpetual way, I will die with a sense of accomplishment and satisfaction I can’t imagine getting from anything else.

The El Camino rumbles as we pull to a stop in front of a half boarded-up bungalow, but it does nothing to cover up the vibrations of the Rammstein music blaring from Mac’s pickup following close behind.

When I open the driver’s door with a squeak, the wind whips against my face, burning my cheeks as I set my feet on the ice-crusted street, wiggling my fingers into my thick sub-zero work gloves. The music stops, and Mac and Tiny step out of the truck looking like two Norwegian World’s Strongest Man competitors dressed for the Antarctic.

“Hey guys.” I nod and wave as the other four volunteers of my non-profit Break-the-Chains Outreach organization pile out of the other vehicle, pulling at their hoods and tugging hats down over their ears as we all approach and huddle together, steam rising into the frigid air with every exhale.