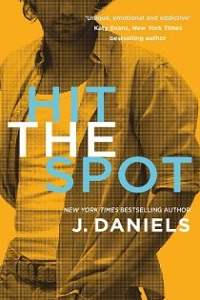 “Sheesh. It’s like a ghost town in here. I’m bored outta my mind,” Shay commented, coming to stand beside me at the counter where I was leaned over, propped on my elbow and doodling hearts on a napkin.

I didn’t need to look up and survey the room to know she was right. It was like a ghost town in Whitecaps, the hip, ocean-front restaurant where I worked. Not a lot of people were venturing out today in the freezing rain-snow mixture going on outside.

When Nate had hired me a month ago, he said things slowed down in the winter. That made sense. Who hung at the beach in December?

I preferred being busy, as did Shay apparently, but I didn’t mind the slow pace today. It gave me time to doodle. I liked to doodle. When I was happy, I doodled a lot.

And holy crap, was I happy.

Shay’s shoulder nudged against mine. “Who’s Wes?” she asked, pressing close. “He your boyfriend?”

I traced his whimsically scripted name with the dark blue pen and nodded.

“How long have you been together?”

“Few weeks,” I answered, looking over at her. “I met him at the market right after I moved here. He was behind me in the checkout line.”

A loud banging noise coming from behind swung my head around and jolted Shay.

Sean, the cook Nate hired two weeks ago, stalked out of the kitchen holding a rag to his hand, snarling and spitting profanities through gritted teeth while his profile held hard and sharp with irritation.

He was tall and cut out of muscle and bone, no fat or softness to him from what I could tell, covered in tattoos, and either didn’t have the ability to smile behind his thick beard or never felt the need.

But he seemed cool, stayed quiet and kept to himself, and wasn’t bailing on a job that had him surrounded by women seven days a week who never kept to themselves and hardly stayed quiet.

I thought that was saying something.

He crossed the room, lifted his big biker boot, and kicked the men’s restroom door open, disappearing behind it.

I did a mental count from what I’d either witnessed myself or heard about after the fact. Maybe someone else should be chopping vegetables for him.

“He should change his name to Stitch,” I suggested, looking to her. “Fits him.”

“I’ll call him that if you do,” she said a little quieter, as if she was afraid he could hear.

“Deal,” I chuckled. I leaned over and began doodling again, darkening in some hearts and heavily outlining the others, my mind on Wes and the date we’d be having this upcoming weekend.

I was really looking forward to it.

He was always working long and late hours during the week. I hardly saw him. Hardly spoke to him either, unless he was calling me back after getting a free minute.

“I’m gonna go see if my one lonely table needs anything, again, even though I just asked them, and until Stitch stops bleeding and gets back to cooking their food, the only thing I have to give is refills and my wit.” Shay slapped the counter, twisted away, then stopped frozen on a gasp. “Sweet. He’s here,” she whispered.

“Who?” I asked, head down and eyes focused on my Wes doodle.

When Shay didn’t answer, I lifted my head out of curiosity, followed her gaze across the restaurant, and met the eyes of the man she had to have been referring to.

I blinked and stood a little taller but stayed angled forward, keeping my weight on my elbows.

He blinked back. And somehow, that blink … was … sexy. I had no idea what qualified a blink as being sexy, but whatever it was, this man was hitting all those qualifiers and could easily take home the trophy for sexiest blink.

I am not one to exaggerate either. This was an honest observation.

I realized quickly after moving to Dogwood Beach that there wasn’t a shortage of good-looking men here. In fact, I was convinced the sand and salty air did miraculous things to the male race, boosting cellular regeneration and gene quality, making even hard-looking men like Stitch beautiful in their own unique way.

I waited on attractive men frequently at work. I saw them around town. Hell, I was currently dating one. This was nothing new. Looks were a dime a dozen in Dogwood.

That being said, I was unprepared for a sexy blink, not to mention the degree of attractiveness belonging to the man responsible for that blink.

The man I was currently staring at, who just so happened to be staring back, directly at me.

Tall, with broad shoulders and long, muscled limbs covered in layered Henley thermals and dark faded jeans, dirty blond hair that looked hand-raked messy and a little damp from the rain, causing it to curl at the ends around his ears and where it lay on his neck. Bright eyes. Thick eyebrows. A perfectly straight nose. He looked model perfect and camera ready, except for the five o’clock shadow speckling his jaw. That roughed him up a bit. And if he wasn’t already scoring points in the looks department, boom, dimples. He … had … dimples.