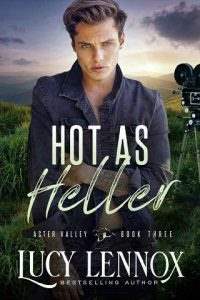 “But nothing, Penny,” I told my dispatcher over my earpiece as I strode down the sidewalk in the center of Aster Valley one bright June morning. “I don’t care how nicely the Gold Rats production team asks, we are not closing down Cade Road on short notice for them to film a high-speed chase. The movie people have disrupted things enough around here.”

I’d left Los Angeles for this tiny Colorado town six months ago for a reason, and that was to get as far away from Hollywood and its players as I could. But now, here they were. Like a fungus I couldn’t get rid of.

Especially the one exceptionally entitled actor I’d had a run-in with the night before.

The man had a face that belonged on the big screen, alright—a face that had been awfully hard to get out of my mind when I tossed and turned in bed last night—but his ego had been bigger than Rockley Mountain, leading me to believe that all the rumors I’d read about him were true.

He was a spoiled brat. A troublemaker. A party boy. A child-star-turned-adult-wannabe. The personification of everything I’d hoped to escape when I’d fled LA.

I’d been minding my own business at a friend’s party when the kid had asked me to valet his car, for god’s sake.

So, no, that movie crew wasn’t getting another damn concession out of me.

“Tell him I say hi,” she said before clicking off. “And if he’s cute, maybe ask him out. I could stand an office romance to spice things up around here.”

“That’s not happening. Ever,” I assured her.

“Morning, Sheriff Stone!” Chaya called out from behind the counter as I stepped inside the coffee shop. “How’s it going?”

It was such a sweet, simple thing, being greeted by name. I still hadn’t quite gotten used to it in the months I’d lived in Aster Valley, Colorado, but I liked to think I was getting there.

“Well, we can take care of that.” She nodded toward a table near the window and lowered her voice just a fraction. “New deputy’s waiting on you. Punctual, which is great, but straight and single, which isn’t great for you. Great for me, though…”

What was with these people? I didn’t need a man. And… she’d learned all that in five minutes? His dating status and that he was straight, too?

I blinked, opened my mouth to—Jesus, I didn’t even know what. Offer Chaya a job getting hardened criminals to confess?—then closed it again. No, I definitely wasn’t getting used to small-town living anytime soon.

“I’ll be over in just a second to take your order,” she added brightly.

“Great. Cup of coffee, black, if you don’t mind?” I suddenly wondered what my beverage order said about my integrity, but I reminded myself that I’d already proven that.

In fact, I’d proven it more than once.

“Deputy Graham? I’m Declan Stone.” I offered him a welcoming smile and reached out a hand to shake. He stood up to take it, and his grip was warm and firm. “Nice to meet you in person finally. Hope you didn’t mind meeting me here. I was thinking an informal breakfast meeting would be a great way to welcome you to town. How was the move?”

Shawn Graham had come strongly recommended by a friend in the FBI, who’d worked with the officer on a missing persons case down in Durango. From everything I’d seen in his application and on his resume, we were lucky to get him.

He gave me an affable smile. “A pain in the ass the way you’d expect, but please call me Shawn, Sheriff. Everyone else does.”

I pulled out the chair across from him and sat down. “And I’m Declan. The sheriff thing’s still fairly new.”

“Yeah, I heard about the trouble with your predecessor.” Shawn took his seat.

“You heard, huh?” I gave him a sharp look, and the man looked a little embarrassed. “Didn’t know the news had traveled as far as Durango.”

“Well, my brother is chief of police over in Meeker. Jay Graham. Maybe you know him? Anyway,” he hurried on when I shook my head, “when I told him I was looking at a job here, he gave me a rundown on the whole extortion plot Sheriff Stanner cooked up, and how a couple of the deputies were involved. Small department like Aster Valley’s, losing part of the force like that had to be a blow.”

He said this so sympathetically, it was impossible to take offense. And besides, it wasn’t like he wouldn’t have gotten the rundown from Chaya or a dozen other Aster Vallians within the next twenty-four hours.

“It was hard on the whole town,” I admitted. “Building back trust in the department is our primary goal these days.”