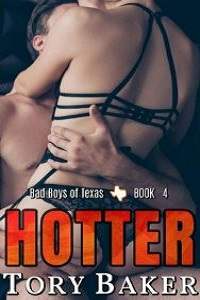 They say if you love someone to let them go. Apparently, a certain man named Creed took that to heart. That or he’s a coward and ran away. I’m more inclined to think it’s the latter with the way he behaved after he took me one hot summer night. I still remember it like it was yesterday, both of us stripping one another out of our clothes, and when I saw him standing in front of me without so much as a piece of fabric on his long and lean body, it had me running towards him. Creed’s mouth met mine, whimpers left my throat when he picked me up, my core sliding along the length of his cock, and when he brought me to the ground, our lips never parting, it was amazing. The best part, though, was when he sunk inside me with nothing between us, not a care in the world—not that he was ten years my senior or not using any type of protection. It was just us, and the amount of pleasure he brought me was indescribable.

The next morning, Creed was a completely different person. Our limbs tangled, bare skin touching, a sweet smile was plastered on my face. He woke up, eyes bleary from sleep and the morning sun, saying it was a mistake, that I was his best friend’s little sister, and a slew of other excuses I refuse to even bring up.

That’s why now that he’s back home after being gone for nearly a year, I’m not sure if I want to hug him or throttle him. It’d been months of being radio silent when it came to him, no matter how many texts or phone calls I received from Creed. He’ll never realize how painful it was when he left, or how I cried that first month when my period came after secretly hoping we’d created a life together. I couldn’t do it. I’m not even sure how I’ll look him in the eye now. I sucked it up, because cowgirls don’t cry.

Too bad watching your brother struggle even when you work beside him twelve hours a day is a hard pill to swallow. No one thought Daddy would be forced to retire at such a young age. A stroke will do that though. Seeing our father try his best to get better day in and day out with little to no avail makes my heart break for him and our mom, who never leaves his side.

I know they say things come in threes, and it sure seems like the Spencer family is seeing that happen this year. I’m just praying the third strike doesn’t result from bringing back a certain man.

I definitely didn’t think I’d have to suck it up and make a phone call I absolutely dreaded after dodging his texts and calls for months. My wounded pride was put to rest though. We were struggling, and the horse farm came before self-importance. Rhett even hired a few extra hands, but it seemed like as soon as we’d train them to help, they’d leave at the drop of the hat. Not that this is an easy job for anyone, and working for Rhett can be a nightmare of epic proportions, but we pay better than most. I couldn’t understand it, neither could Rhett. So, we stopped hiring people and took over the workload until I was bone tired, in tears, and so sore that even a hot bath wasn’t helping.

When Creed picked up on the first ring, tears gathered in my eyes, emotion clogged my throat, and I pleaded for help. He didn’t hesitate, telling me he’d be home within two weeks and to try and do our best until he got here. Creed was meant for bigger things, and even now, I feel horrible for calling him home, but I can’t do this anymore. If it gets much worse, I’ll be the one running away like Creed did, and I can’t do that to my family.

Damn, she hasn’t changed a bit. If anything, this time away from Laney has only heightened her beauty. Rich chocolate hair up high in a ponytail, showcasing her profile, lips whose taste I can’t forget, like those sweet little sighs she made when I sank inside her. But she’s fucking untouchable.

“Hey, man, didn’t think I’d see you home for another few months.” Rhett comes into view, blocking me from the object of my every waking fantasy.

“Yeah, found a job closer to home. Won’t be working weekends very much, and a few late nights. You need some help around here?” I don’t tell Rhett that his sister called me, practically sobbing, pulling at my heartstrings to come home and give them some kind of reprieve. I’m also not ashamed to admit that part of it is for my own selfish reasons. After more than nine months away, I’m tired of fucking fighting this feeling when it comes to Laney.