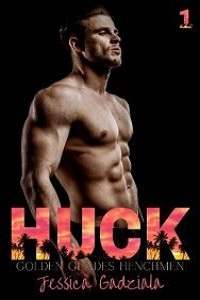 Maybe moving next to a biker compound hadn't been my smartest decision.

In hindsight, it was likely why the lease had been so inexpensive. It wasn't exactly a secret when I'd passed the clubhouse that bikers lived there. The bikes were lined up out front, chrome and black, getting meticulously cleaned by a young guy wearing a black leather vest with the word "Prospect" across the back. If that wasn't enough, there were also several tall men standing around in similar leather vests observing the younger man washing their bikes for them.

The lady trying to show me the house had kept casting glances in their general direction as though one might come crashing through a wall like the Kool-Aid man at any moment. Then when I'd told her I would take it, she'd lowered her voice, leaned in more closely, and asked in a horrified little voice, "Are you sure, honey?"

Up until that moment, I hadn't even given the bikers a second thought. I mean, guys on bikes were everywhere. I didn't see the issue.

I might also add that I'd been blithely unaware about the differences between regular bikers and one-percent MCs.

But, I figured, if I didn't mess with them, they wouldn't mess with me. And I could always add a security system if I was really worried about it.

The thoughts never went beyond that.

I signed the papers. I'd hired someone to move my stuff in. And then I'd done so myself, settling right in.

You know... for all of eight hours.

Because that was when the partying began.

Now, I would never begrudge anyone their good time. Just because I was a loner who hadn't been to a party in years didn't mean that these guys couldn't have some fun.

Only, these guys didn't seem to party like normal people partied. You know, meaning at some point, the party ended.

It seemed like they started the party around eight p.m. on a Friday night. And then it just never fully stopped. I mean, sure, I imagined they all slept at some time or another, but the music thumped, the cars and bikes came and went, drunken people jumped in and out of the in-ground pool. Naked, I might add.

On the one hand, it looked like a great time.

On the other, I worked from home, and I needed to be able to hear myself think. And not, you know, glance out my window to see several sets of boobs bouncing as the women ran and squealed around the pool, getting chased by some random well-built man or another.

And, yeah, okay, maybe some of my distraction had less to do with them living their lives on their own damn property, and more to do with the fact that a man hadn't chased me around naked in more months than I cared to recall. So while a normal, sexually satisfied person would have looked away when one of said men grabbed one of said women, hauled them back against their strong bodies, and pressed a hand between their legs, I stood there in my Chewbacca slippers and watched for a long couple of moments while I sipped my eighth coffee of the day.

What can I say, when you don't sleep, you need to fuel your engine in some way.

Hell, I wasn't even mad about their musical choices. They kept a nice rotation of metal, hardcore, punk, rap, and the occasional pop song.

The problem wasn't the music; it was the fact that it was blasting in my office when I was trying to record. And I was worried that if the mic kept picking it up, I would get a copyright strike that would take down my videos, and my ability to make money with them.

I'd done everything I could. Seeing as, you know, I had no intention of approaching an outlaw biker club and asking that they turn down their music for an hour or two here or there.

My first order of business had been the soundproofing tiles for the wall. It was a good thing they ended up looking cool with purple and light blue zig-zag pattern, because they didn't do much to dull the sounds. I'd tried getting up at the crack of dawn, the middle of the night, smack-dab in the center of the day. I'd tried to move the equipment to the other side of the house, all to no avail.

What other option was there?

Because I was pretty sure calling the police would get me shot—or worse.

I guess, if it came to it, I could break my lease, take the financial hit, find a new place.

I mean, if I didn't get some work done soon, there would be no money to pay the rent anyway.

I was just sitting down to try to work when there was a different kind of thumping to be heard. Coming from the front door.