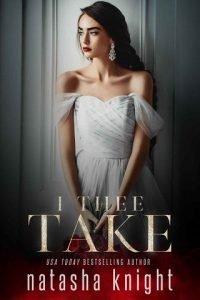 Six men lie on the ground at the front of the house, all but two shot execution style. The two are riddled with bullets. They were taken by surprise. The others were rounded up. They saw death coming.

“The front door was open when we got here,” Antonio says.

I should have left him with her. Why didn’t I leave him?

“Any of their soldiers among the dead?” my uncle asks.

We were ambushed. Betrayed again. No one knew this house even existed. Even if they did, no one knew she was here. No one but the men who were here with her. Who are now dead.

All except for one.

“Where’s Alec?” I ask. He’s the lone survivor. He called it in a few hours ago.

I look beyond the house to the mountains. Turn around to the ocean. They drove right up. Killed the men at the checkpoints and continued straight to the house.

I turn to my uncle who has remarkably not puked at the sight of the bloodbath, both outside and inside the house. Maybe I don’t know him as well as I think.

Inside is decidedly worse, the blood marking the walls and furniture. I’m taken back in time, back a full decade to another massacre.

The other half dozen men and the kitchen girl lie dead. Shot in the back of the head execution style like the others.

The bedroom doors stand open and from here I see the rumpled bed, see the shards of glass from the whiskey bottle I’d smashed against the wall. The bathroom light is on, too.

At least she’s not dead. They didn’t kill her. Anything is better than dead.

“Cris,” Alec starts, rising from his seat, but wincing and falling back down to the chair.

I look him over but can’t tell how much of the blood is his and how much is from the others. What strikes me most isn’t that. It’s his expression. The tears he’s trying hard not to shed.

The last time I saw a grown man cry was when my father watched his wife degraded before his eyes.

My jaw tenses, my gut twists.

“He’ll be fine. Out of commission for a while, but fine,” the doctor who stitched me up just days ago says. Lately, it seems I singlehandedly keep his mortgage paid. “Can’t work this arm for a while and he’ll need a cast for his leg.”

“Mexican soldiers. Her uncle led them.”

Jacob De La Cruz. I’d seen him just hours ago. Ordered him to arrange a meeting with that fuck Felix Pérez.

He doesn’t quite look at me.

I grip his hair, force his face to mine. He needs to man up. I made a mistake trusting him to protect her.

“She was hunched over when they dragged her out,” he pauses. “Naked,” he adds in a barely audible whisper.

It’s hard to swallow. I can’t put a finger on the thoughts and emotions turned to physical sensation inside me. Blood pounds against my ears. A burning hot rage followed by the cold fear of loss. Of losing someone else. Losing her.

My dream comes back to me, that scene again. Scarlett in my mother’s place. Scarlett calling for me. Calling for me to help her. It was no coincidence.