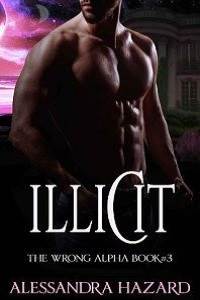 “Your brother is alive.”

Liam Blake stared at the man, wondering if he was hearing things.

“What?” Eric and Jules said together, voicing his confusion.

Peter Cerrigan, their family solicitor, smiled at the three Blake brothers, his smile kind and understanding. “Your eldest brother, Anthony Blake, is not dead. We’ve received word that he’s alive. It seems he was heavily wounded and it took him a long time to recover, which was why he was mistakenly declared dead. He’ll return home any day now.”

Liam sat down heavily on the couch, feeling… he didn’t know what. Happiness didn’t seem to be the right word. He hadn’t seen his eldest brother in fifteen years. He had been just five when Anthony had left to join the war after a huge row with their alpha mother. He’d been gone ever since. He’d never contacted them, not even once. Liam hadn’t understood why when he had been a child, but as an adult, he could understand that their mother’s overbearingness might have been the reason. Alphas preferred independence and had trouble getting along with other alphas even when they were related. Their mother had been kind of… stifling, to be honest.

Except their mother had died last year, but Anthony had still failed to return home and assume his responsibilities. Liam couldn’t deny that he had resented that—resented Anthony—for not giving a damn about them. But when a few months ago they’d received word that Anthony was presumably killed in one of the last battles of the war, all his resentment was gone, and there was only the ever-growing desperation: with their mother and eldest brother dead, their home was no longer their home. The Blake properties were entailed to alphas, so their mother’s younger brother, Uncle Wayne, inherited everything, leaving Liam and his younger brothers completely dependent on his kindness. And Liam would rather not depend on that—Uncle Wayne wasn’t a kind man.

The old solicitor nodded. “He is. We were told the viscount will return home as soon as he passes the identity verification in the Inheritance Department.” He winced. “Could you boys inform your uncle that the Blake accounts will be frozen until your brother’s return?”

Liam nodded, though he wasn’t looking forward to delivering that piece of news to their uncle. Uncle Wayne wasn’t going to be happy. Putting it mildly.

“Sure we will,” Jules said, smirking.

Liam shook his head in fond exasperation. Unlike his younger brother, he didn’t relish conflict. He’d learned a long time ago that it was more effective not to contradict alphas openly—and then subtly make them change their opinions. Liam found that strategy far more efficient than pointless confrontation. Alphas hated being wrong, hated being humiliated and mocked. People were correct to say that one would catch more flies with honey than with vinegar.

Jules blinked and gave him a very innocent look, as if to say, Who, me?

Liam chuckled. “I’m serious, you dolt. Until Anthony returns, Uncle Wayne is still our family alpha and he can create plenty of problems for us. You aren’t married to Westcliff yet.”

As always, Jules’s expression turned nauseatingly soft and lovesick at the mere mention of his fiancé.

Liam smiled faintly. He had to admit he had felt more than a little humiliated when the Duke of Westcliff had publicly declared his intention to marry Jules even though he’d been courting him, Liam. It had stung. It had. But he loved his brothers and he was happy for Jules—he’d never seen Jules so happy.

But truth be told, sometimes he felt a pang of wistfulness and envy when he saw Jules so happy and in love. He’d like that. He’d like to fall in love and marry for love. But after the past social season, his hopes were at an all-time low. He’d met thousands of perfectly eligible alphas, many of whom were handsome, titled, and rich—and yet Liam had felt nothing. Not even a flicker of attraction. He couldn’t help but wonder if there was something wrong with him. It was possible. He wasn’t on suppressants, but his heats were very weak, which was pretty unusual even for Vos omegas.

Maybe he was just defective.

Liam tried to push the dreaded thought away, but once again, it kept coming back. Defective omegas were very rare, but sometimes it happened. They were spoken about only in whispers, their existence denied by their families. They were considered abominations. Defective omegas were neither fertile nor nurturing nor passionate—things omegas were known for. Liam couldn’t be sure whether he was fertile or not, though his very weak heats were worrying, but he was definitely bad at being nurturing and passionate. He always felt awkward when he had to comfort his little brothers, always felt awkward when he hugged them, as if giving comfort was something unnatural for him. As for passionate… well, after the past social season, he had no delusions about that, either. There was something wrong with him. He wasn’t like other omegas.