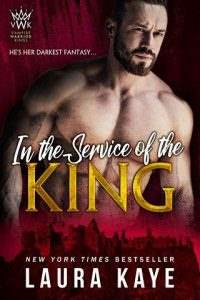 Kael paced the length of his private sleeping chamber, avoiding the plush emerald carpet and keeping to the uncovered stone floor at the edge of the room. After an hour of ceaseless movement, the cold of the large polished slabs bit into the flesh of his bare feet and gave him something to focus on besides the Proffering, which he loathed but required. Three months had passed since his last feeding, and the Warrior King needed the blood of either his mate or a human virgin to maintain his immortality and the strength of his humanity.

He had no mate, and no intention of acquiring one.

But Kael the Fair never felt less like his name than when he stepped into his feeding chamber and found the Proffered waiting within.

“My lord? It is time.” Liam’s deep voice sounded from the hallway.

Kael halted before the wide carved mahogany door, his layered dark green and navy tartan robes settling around him. He rolled his shoulders and tilted his head to the side to stretch his neck. The familiar weight of the intricate jeweled braid on the left side of his head moved as he tried to release the tension seizing his muscles. The jewels were the most obvious of the physical marks of his royal rank; the rest were written into his skin.

Tonight, of all nights, he felt the burden of the duty and obligation they represented.

“My lord?” Liam pushed the door open and stepped back.

Kael sliced his fangs into his tongue to keep from snapping at the man who had stood at his side for the past seven hundred years. Equally ancient and nearly physically matched, Liam was the brother Kael never had and knew the king as well as any living being could. On many occasions they had stood together against their enemy, the Soul Eaters, so named not just for draining the blood of their human victims, but for consuming their souls as well by drinking through the last stutter of their hearts. Then removing and eating it.

All vampires required human blood, but only the Soul Eaters gave in to the lure of exsanguination, became addicted to the kill, and murdered their human prey. And their selfish and increasingly brazen actions were making it harder to hide their collective existence from the mass of humanity.

Kael and Liam didn’t speak as they navigated the worn stone corridors of the king’s ancestral estate. The underground compound was located far beneath the ancient walls of Castle Dunluce, within the craggy cliffs on the coast of County Antrim in Northern Ireland. Kael’s clan, the MacQuillans, had inhabited the land since the late sixteenth century and transformed a small existing tower house into a sprawling, indomitable fortification meant to provide Kael and his vampire brethren the privacy and security they required.

In modern times, Kael chose to dispel unauthorized prying of the aboveground ruins by turning over their management to Northern Ireland as a state historic site. The arrangement provided maintenance to the castle remains and landscape during the problematic daylight hours, dedicated security, and humans loyal to the MacQuillan “descendants” who visited the site occasionally and supported its preservation with large, regular bequests. It was rather like hiding in plain sight.

The normally busy halls of the castle’s central manor house were empty, as Kael preferred on the Night of the Proffering, and only dimly lit by occasional wooden torches. The compound possessed every modern convenience and security mechanism, but firelight comforted the Warrior King, and put him in mind of times of old, before the conflict with the Soul Eaters had become so constant and tiresome.

On the castle’s walls, medieval tapestries hung next to Renaissance portraiture and modern art, but Kael gave his priceless collections little regard. He wanted the strength that feeding provided, but hated the means by which it had to be obtained. To be sure, the Proffering sustained him. He required it. But it also reminded him of all he’d lost, and what he’d never have again.

Finally and too quickly, they arrived at the antechamber to the set of apartments used by the Proffered when on the grounds. Liam opened the door and stood back, bowing his head of shoulder-length brown hair—braided at the left in the way of the warrior, and allowed the king to enter ahead of him. “After you, my lord.”

Kael stepped into the oval room and huffed. “Would you cut the ‘my lord’ crap already?” He rolled his neck again. As a room, it wasn’t particularly remarkable—it was bare except for a small altar at one end and hooks for his robes and a few ceremonial implements at the other. But it was so loaded with everyone’s expectations that the air felt thick as he drew it down his throat.

Liam grinned before schooling his expression. “As you wish, my lord.”