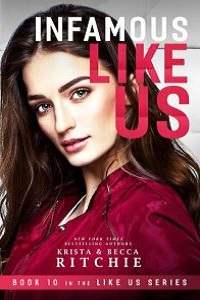 Fireworks blast off into the California night sky. I don’t see colorful bursts of light, but the noise thunders around me and vibrates the ground. Even the bathroom stall rattles from the cacophony—a very real reminder that I shouldn’t be squandering my time here on this fucking toilet.

Or as Banks calls it—a shitter.

My lips rise as soon as I think about one of my boyfriends. Boyfriends. Not such a bizarre fucking concept anymore. At least to me. I’ve lost a lot of faith that the world will ever understand. I told Akara that I bet they’d only approve if I died.

In my death, they’d accept my love of two men because I’d be gone and there’d be nothing left to criticize or hate. Or maybe they’d just keep on hating.

We’re not letting anyone get to us, Akara reminded me. It’s been our motto since we confirmed our relationship to the world.

We’re not letting anyone get to us.

They won’t break us apart.

They won’t hurt us.

I’m fucking competitive, but I never imagined the harder race would be against anonymous faces and internet hatred than swimming an actual Olympic event.

They won’t hurt us.

But fuck, does it hurt some days. Thick skin comes and goes like armor I’m renting from the Cobalt Empire, but Moffy says that the painful parts just make me human. Jane says Cobalts hurt too.

Beckett tells me not to worry—that all my family are here for me. And they are. Literally. Cousins, aunts, uncles, plus my mom, dad, and sister are in the packed stands somewhere outside this bathroom. Even Beckett, my notoriously busy best friend, has taken a couple weeks off ballet to cheer me on.

And here I am, holed up in a fucking toilet stall. Hoping my current mega-crisis will shrink to a mini-one. My pulse climbs, knees jostle. Boom!

I blow out a measured breath and try to let my pulse decelerate. We arrived in Los Angeles over a week ago to frenzied crowds, aggressive paparazzi—more pushing and pulling—and I want to blame this fucking city for the extra mayhem, the extra stress, the invasive questions and blistering spotlight.

But it hasn’t just been a week of fame I can’t escape, can’t circumvent, can’t outwit, outplay, or outlast.

Six months since everything changed.

Sitting on the shut toilet lid, more worry crawls under my skin, but the source isn’t from brash noises or impending danger.

Nerves swarm me as I stare hard at the slim white pregnancy test in my hand.

I jerk my neck. You’re safe. You’re fine, Sulli. Fireworks are like a ticking clock, telling me I need to hurry. I need to go. Join the festivities.

Delight in all the hard work that brought me here.

Be with my boyfriends, who are no doubt a little fucking freaked out that I’m taking so long. But I can’t leave until I have this one answer.

“Sulli, get your fucking shit together,” I coach under my breath. My legs jostle more as I stare hard at the test.

I already pissed on the stick and recapped it.

Thirty-seconds through the 5-minute wait, and I swear I’m already sweating through this thick navy Ralph Lauren blazer.

“It’s the Opening Ceremony to the fucking Olympics,” I whisper. “And you’re in a bathroom talking to yourself while you wait for…” I can’t finish the words.

Not that I think someone will overhear. Akara and Banks searched the bathroom stalls before I even entered. All clear. Now my boyfriends stand guard outside the door, and my stomach is in knots.

I check my watch. “Three more minutes,” I say to myself. Hearing my own voice calms me a bit more. Noise is a constant background whenever I’m in public, and I haven’t been swimming in this much quiet during make-it-or-break-it, stress-induced situations in a while.

I could call Akara or Banks in here.

To wait with me. To be a shoulder to lean on. To comfort me. They both would. But here’s the fucking thing: I haven’t told them.

When I realized I missed my period recently, I didn’t want to bring up the issue to Akara or Banks. We already had one scare months ago after the condom ripped. And fuck, we’ve been careful since that slip-up at the end of January. I took Plan B. I got my period.

Now it’s the tail-end of July, and I’m in a worse situation. Too late for Plan B. A pregnancy test in hand.

Even buying a pregnancy test took Harry Potter levels of sorcery—exactly what Luna said to me when she slipped the pregnancy stick in my pocket like a badass James Bond.